Browse and compare solar panels from top manufacturers on the EnergySage Buyer’s Guide. To learn about other solar energy system components, visit EnergySage's solar inverter and solar battery buyer's guides.
Solar panels are the key component in any residential, commercial, or utility-scale solar energy system. Use this guide to compare solar panel options and understand which products are best for your installation.
2,688 - 2,700 of 2,742
2,688 - 2,700 of 2,742

There are thousands of solar panels available – how do you know which ones to use for your installation? Some important aspects to consider when comparing your options include panel type, cost, wattage, efficiency, and warranty offering. All of these aspects plus more are considered in each panels' quality rating. 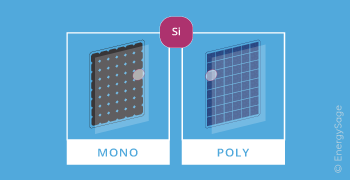 The cost of a solar panel installation varies by location, property type, and, of course, the panels used for the installation. Premium solar panel products with high efficiencies and advantageous warranties usually cost more money upfront but can offer higher potential long-term savings. The best way to evaluate the price of a solar panel installation is in dollars per watt ($/W). Similar to comparing dollars per square foot when shopping for a home, $/W helps standardize the cost of solar by showing the cost of solar on a per watt basis. Currently, the average price of a solar panel system install in the U.S. is $2.91/W.
The best way to estimate how much a solar installation will cost you is with EnergySage’s Solar Calculator. Our tool takes into account how much sunlight you’ll get, local electricity rates, as well as any state and federal solar incentives like rebates and tax credits.

How do solar panel warranties work?

The EnergySage classification system incorporates technical specifications for solar panels to compare their performance, durability, warranty and overall quality. By assessing each product across a range of metrics, the EnergySage rating system groups equipment into five different classifications: Poor, Fair, Good, Very Good and Excellent.
Products rated as Poor or Fair are at the low end of what is currently available in the market, or may be outdated models no longer produced by manufacturers and rarely stocked by solar installation companies. Equipment receiving Good, Very Good or Excellent ratings must meet a baseline set of criteria rigorously developed so that you can be confident that your solar energy system will meet your needs.

Whether you have experience shopping for solar panels or you’re totally new to researching renewable energy, we strive to provide comprehensive information to help you make a final decision. Check out a few more of our customers’ most frequently asked questions.

How many solar panels do I need for my home?

The average home needs between 20 and 25 solar panels to fully offset their utility bills with renewable energy. This number depends on a variety of factors including location, climate, panel efficiency, and individual panel specifications. For more information, read our article that helps calculate how many solar panels you will need using relevant examples.

Are solar panels worth it?

Which brand of solar panels is the best?

Overall, finding the best solar panel brand comes down to comparing their efficiency, temperature coefficient, and warranty. Currently, SunPower, LG, REC, and Panasonic make the best solar panels due to their high efficiencies, competitive pricing, and 25-year warranty. If you’re looking for more detail, read our article that compares the top brands and solar panel products.

Want to learn more? Here are some of the best articles from our website to help you get started learning about solar energy:
Solar 101: Start here with the key things to understand when considering solar panel installation options.
Best solar panels: Learn about top panels on the market ranked by efficiency, temperature coefficient, and more.
Steps to a solar installation: An overview of the main parts of the solar installation process.
Get Quotes
Get Solar Quotes