Learn About Solar  |  Solar 101  |  What Are Solar Panels?  |  Microinverters vs. Power Optimizers 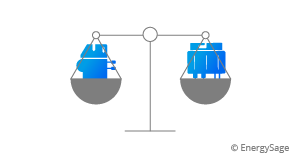 Inverters are a very important component of any solar panel system: while solar panels convert sunlight into electricity, inverters ensure that the electricity they produce is usable in your home. There are three primary types of inverters: string inverters, inverters + power optimizers and microinverters. String inverters are the oldest technology: they are a proven, durable and cost-effective option that have been installed for decades throughout the world. Microinverters and power optimizers are newer technologies and have been on the rise in popularity over the last decade, especially on the residential market, for their ability to improve the performance of systems that experience shading or that are on complex roofs.

Microinverters and power optimizers are very comparable and are sometimes described as interchangeable in the industry. They are collectively referred to as “Module-Level Power Electronics,” or MLPEs.

Similarities Between Microinverters and Power Optimizers

While microinverters and power optimizers provide many of the same benefits, the two technologies also have many differences, as explored in greater detail below.

1. Where the DC converts to AC

If you choose to install microinverters with your solar panel system, one microinverter will be placed at each panel, either integrated into the panel or placed on the panel mount. In systems with microinverters, the DC energy is converted to AC right at the site of the panel.

Power optimizers are also the less expensive option in terms of scalability. In general, as solar panel systems get larger, the cost per watt decreases. However, if you choose to install a system with microinverters, you have to purchase a microinverter for every additional solar panel that you add to your system. If you choose to install a system with power optimizers, your system will still use one central inverter. As a result, your cost per watt will decrease as your system size increases.

Over the lifetime of inverters and power optimizers, you need to consider if and how many times they’ll fail, as well as how much of your solar production will be impacted in the unlikely event that they fail. In the event that an individual inverter fails, it will likely cost more to replace a microinverter or a power optimizer on a roof than it will to replace a string inverter on a wall at ground level, given the need for roof access.

However, that’s only part of the calculus around life-time maintenance costs. The leading microinverters are warrantied for 25 years, whereas many string inverters are warrantied for only 12, implying that you might have to replace your inverter mid-way through the lifetime of your solar panels. Additionally, it's important to take a close look at what's included–and what's not–in a company's warranty terms. Does the company cover installation labor, replacement and the shipping of parts? And what is the claim process like for getting a warranty processed? All of these are important considerations when choosing the type of inverter to install on your property.

Both microinverters and power optimizers are compatible with battery storage. However, depending upon whether you want to DC or AC couple your battery, it may need to be paired with a particular type of inverter. If you’re considering battery storage, it’s a good idea to talk to your installer or electrician about which inverters would work best with your battery of choice.

Microinverters vs. Power optimizers: Choosing the right option for your system

Microinverters and power optimizers have very similar efficiencies, are good for monitoring individual panel performance and can help maximize energy production on slightly shaded or complicated roofs. But your preferences will ultimately determine which option is best for your home.

It’s important to keep in mind that microinverters and optimizers certainly aren’t the only options available – if you’re looking for the most economic option and have a south-facing roof with little shade, string inverters are the way to go.

Compare your inverter options to find the best match

You have the power as a consumer and a solar shopper to explore both your microinverter and power optimizer options. Start by reviewing the different manufacturers offering the two types of technologies. Then register your property on EnergySage – our network of pre-screened, vetted installers will provide you with no-obligation quotes that you can easily compare side-by-side to find the best solar panel system to fit your needs.