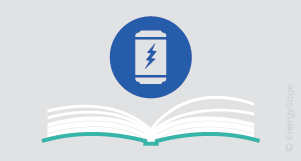 Home energy storage systems are becoming increasingly popular in the US. Solar installers say that one third of customers nationwide express interest in energy storage, while on EnergySage’s Marketplace that number is even higher, with over 70% of solar shoppers also interested in energy storage.

With so many new terms to digest, we thought a glossary of common terms and concepts related to energy storage would be helpful. Here are the key terms you’re likely to encounter while researching energy storage.

Adding electricity to your battery. This is the exact same as charging your phone. You can either charge your battery with the electrical grid or from an on-site renewable resource, like solar panels on your house.

Different batteries have different methods of storing electricity. While some, like flywheels, use a mechanical system to store kinetic energy as potential energy, most residential energy storage solutions use chemistry to store electricity. The most common chemistries for batteries are lead-acid, lithium-ion, zinc, and sodium.

When reviewing information on the size of an energy storage system, it’s important to make a distinction between power and energy. At a high level, power is the size of the pipe–how much electricity is the maximum that you can push through at one time–whereas energy is the flow through the pipe–how much electricity has moved through the pipe total over a certain period of time. There are a number of battery-specific terms that help describe the energy and power of the systems.

Power is rated in kilowatts and is a measure of the maximum amount of electricity that an appliance requires in any instant. For batteries, power is an important metric because it determines how many appliances and home applications a battery can power concurrently. In order to understand the size battery you need, it’s useful to compare the power rating of a typical residential energy storage system to the power requirements of the appliances you want to be able to run with your battery.

Various home processes range from using several Watts of power, to several hundred or even thousands of Watts of power. At the low end, a standard compact fluorescent (CFL) light bulb uses about 15 Watts and a phone charger uses less than 10 Watts. Both a refrigerator and an LED TV pull about 200 Watts of power. Meanwhile, at the high end, appliances such as clothes washers and dryers, air conditioners, and even hair dryers or coffee makers use over a thousand Watts of power.

The energy of a system is rated in kilowatt-hours and is representative of the amount of time that you use your appliances for. In other words, energy is power consumption multiplied by time: kilowatts multiplied by hours to give you kilowatt-hours. In order to understand the energy sizing of batteries, you need to know how long you want to be able to run your appliances for with your battery. Running many appliances for a long period of time would require a larger battery from both a power and energy perspective, while running fewer appliances for a shorter period of time would require a smaller battery from a power and energy perspective.

Continuing the example of power requirements of home appliances from above, keeping ten CFL light bulbs on for six hours uses nearly 1 kilowatt-hour of electricity (10 CFLs * 15 Watts per bulb * six hours). A television or refrigerator may use 1 kilowatt-hour of electricity over a full 24 hours, depending upon how often the TV is turned off and on and to what temperature the refrigerator is set. Running a central air conditioner, on the other hand, could use 10 kilowatt-hours per day.

The absolute maximum amount of power that a battery can discharge over a short burst of time. This is typically described as the power output over several seconds to several minutes. Max power is important because the power requirement for certain appliances–notably a sump pump–spikes when you turn them on. As a result, for a battery to power certain appliances, you will need one that can push out a large quantity of power over a short period of time to allow you to turn on those systems.

The constant amount of power that a battery can discharge over a prolonged period of time. The continuous power of a battery will always be lower than the max power. If you plan to run many power-intensive appliances concurrently with your battery, then you will need a battery that has a higher continuous rated power to be able to power many appliances all at once.

How much electricity is stored in the battery in total when fully charged. Expressed in kilowatt-hours, this is an energy metric that demonstrates the amount of electricity that would be available if you could fully discharge your battery all the way to zero.

The amount of electricity stored in the battery that is available for consumption. Batteries have their own native load requirements. In other words, batteries require a certain amount of electricity to continue to run themselves. As a result, not all of the electricity that is stored in a battery is available for you to consume. If you try to use beyond the usable energy of a battery, it may have detrimental impacts on the health and longevity of your battery.

Many batteries provide additional benefits beyond just the ability to charge and discharge. How those benefits work and whether they are important to you can help you decide amongst different battery options.

If you are interested in continuing to power your house from your battery in the event of an outage on the electrical grid, then you need a battery capable of “islanding”. Batteries with this capability will recognize when the power grid is down and cut your house off from the electrical grid so that it can continue to operate smoothly, effectively turning your home into an energy “island”.

Appliances require electricity to turn on. So how does your battery turn on if the electricity is out and your battery is out of juice? In that case, your battery needs to be capable of to be able to come back online. The idea of “black start” comes from redundancy built in to the electrical grid, where there are power plants that are capable of turning on when the entire electrical grid is down so that the system can get running again. Black start is important in places where you anticipate needing to power your home with stored solar energy during prolonged outage events, such as places that are frequently hit by major storm events.