Sustainable San Mateo is Offering You a Simple & Easy Way to GO SOLAR!

or start with an Instant Estimate of your solar savings 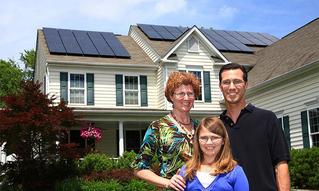 Sustainable San Mateo County (SSMC) was established in 1992 by a group of San Mateo County citizens who sought to create a broader awareness of the sustainability concept. Our core programs are the Indicators Report which has been produced annually since 1997 and the Awards Event which has been held annually since 1999. In addition to coordinating these core programs, SSMC engages regularly with a broad range of stakeholders to advance a variety of projects, programs and other efforts that are consistent with SSMC’s Vision, Mission and Values.

How the EnergySage Marketplace Works

The EnergySage Marketplace gets you quotes online from multiple, pre-screened local installers and helps you compare offers in an apples-to-apples format so you get the best deal.

Register and complete your property profile

Installers compete for your business

Pick the best quote for you and save with solar!

Learn more about the EnergySage Marketplace

or start with an Instant Estimate of your solar savings