Clean energy is becoming increasingly prevalent in America and around the world. Renewables are a low-cost and environmentally-friendly way to get the energy we need to power our society.

What is renewable energy?

While some types of renewable energy like solar and wind power are virtually limitless, renewable resources like biomass are replenished within a human lifespan. This is a key distinction from non-renewable energy sources like coal, oil, and gas; these resources take millions of years to form deep in the earth, and as such, they are depleted many times faster than they can regenerate naturally. 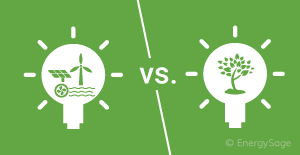 The terms “renewable energy” and “clean energy” are both commonly used to describe energy derived from renewable resources. While often used interchangeably, it’s important to understand the differences between these two terms as each one refers to a slightly different type of energy.

Renewable energy refers to energy from renewable resources that replenish on a human timescale and don’t run out. Renewables are often environmentally friendly but include power sources that can have some negative environmental impacts, such as hydropower.

Clean energy refers to any energy that is net neutral or positive in terms of pollution and environmental impact. Most forms of renewable energy can also safely be called clean energy.

There are five main types of renewable energy:

Each type has pros and cons and unique applications, and they will all undoubtedly play an important role in our clean energy future.

Solar energy is energy derived directly from the sun. We can capture this incoming light energy is a variety of ways, including with concentrated solar technology, solar thermal design, and solar photovoltaic panels. Solar energy is collected at various scales, from small residential setups to sprawling utility-scale solar farms.

Wind power is energy generated from the wind, which is simply air flow within the earth’s atmosphere. Wind energy is actually an indirect form of solar energy; because the sun heats the earth’s surface unevenly, air flows in small and large patterns around the globe to distribute the sun’s heat. By using wind turbines of various sizes and setups, we can harness this moving air to spin turbines that generate electricity.

Hydropower (also referred to as hydroelectricity) relies on energy in moving water to produce energy. There are several ways we can generate power from water. Most commonly, rivers are dammed to store water in a reservoir that can be released through a turbine system to generate electricity. Additionally, tidal power and wave power are secondary ways of generating electricity from water, using the ebb and flow of tides and the power of ocean waves, respectively. All three of these types of hydroelectricity generation rely on moving water to spin turbines.

We can also find a reliable source of renewable energy beneath our feet. Geothermal energy is heat derived from the radioactive decay of particles deep within the earth. All rocks contain trace amounts of radioactive material that decays slowly over millions of years, generating heat in the process. This heat can be seen in at the surface in the form of volcanoes, but just about everywhere under the earth’s surface, geothermal heat warms the ground and rock, thus can be used for heating and electricity generation.

Renewable energy generated from organic plant and animal matter is known as biomass. Biomass is perhaps one of the most traditional renewable energy sources: some examples include wood, crop waste, and animal manure. Biomass fuels can either beburned directly to produce heat, or converted into biofuels like ethanol and biodiesel that can be burned later.

Pros and cons of renewable energy

There are many advantages to renewable energy, and at the same time, several disadvantages to take into consideration. Here are a few (not all) items to keep in mind about the varios advantages and drawbacks of clean power:

On the pros side, clean energy is an essentially limitless source of power, it provides many health benefits, and it lowers our reliance on energy from around the world. On the cons side, renewables can be intermittent, they often need energy storage to be fully effective, and deployment is limited by some geographic factors.

Below, we'll explore these pros and cons in further detail. 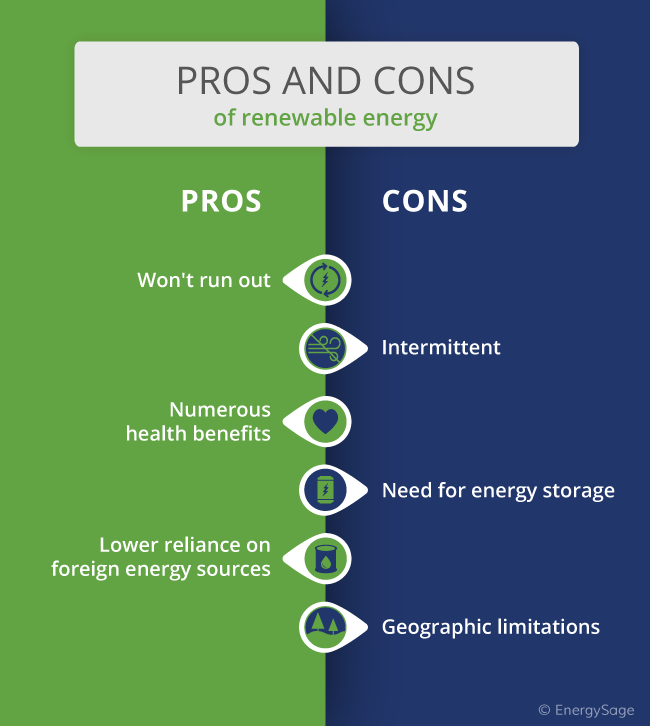 Renewable energy sources use resources straight from the environment to generate clean power. Renewable resources won’t run out over time, which cannot be said for many types of fossil fuels – as we use fossil fuel resources, they will be increasingly difficult to obtain, likely driving up both the cost and environmental impact of their extraction.

The use of fossil fuels not only emits greenhouse gases but other harmful pollutants that have been shown to lead to respiratory and cardiac health issues. With renewable energy, you’re helping decrease the prevalence of these pollutants and contributing to an overall healthier atmosphere.

Additionally, clean energy supports the health of the natural environment. Renewable energy generation sources emit little to no greenhouse gases or pollutants into the air - this means a smaller carbon footprint and an overall positive impact on the environment. During combustion, fossil fuels emit greenhouse gases, which have been proven to contribute to rising global temperatures and higher frequencies of extreme weather events.

With clean energy technologies, we can produce energy locally. The more renewable energy used, the less we need to rely on imported energy, and the more you’ll contribute to U.S. energy independence as a whole. For example, sunlight is accessible (albeit in larger or smaller quanitities depending on location) around the world, so there's a lower need to import oil from producing countries.

Though renewable energy resources are available around the world, many of these resources aren’t available 24/7, year-round. Renewables are considered "intermittent", meaning they aren't capable of producing energy at all times. Some days may be windier than others, the sun doesn’t shine at night or on cloudy days, and droughts may occur for periods of time. Additionally, there can be other unpredictable weather events that disrupt clean energy technologies.

Because of the intermittent nature of many clean energy sources, there’s a need for energy storage paired with it. While there are storage technologies available, they can be expensive, especially for large-scale renewable energy plants. It’s worth noting that energy storage capacity is growing as the technology progresses, and batteries are becoming more affordable as time goes on.

The United States has a diverse geography with varying climates, topographies, vegetation, and more. This creates a beautiful variety of landscapes, but also means that there are some areas that are more or less suitable for renewable technologies. For example, a large farm with open space may be a great place for a residential wind turbine or a solar energy system, while a townhome in a city covered in shade from taller buildings wouldn’t be able to reap the benefits of either technology on their property.

The role of renewable energy today

Although renewable energy still makes up only a small portion of our overall energy mix, that portion is expanding and has experienced immense growth over the last several decades.

Interestingly, renewable energy was highly popular in early America. Biomass was one of the most common energy sources for homes, and early industrial endeavors were often powered by hydropower, via water mills. However, the industrial revolution brought about the use of fossil fuels like coal and oil, which have since remained the dominant energy sources in the country.

Renewable energy policy and incentives in the United States

Policy tools are essential to increasing the use of renewable energy sources for electricity generation, heating, cooling, and more. There are policies in place at the federal and state level that promote renewables and help offset costs for customers of all sizes, from residential to utility-scale projects. The Database of State Incentives for Renewables and Efficiency, or DSIRE is the best place to browse current renewable energy policies at the federal and state level.

At the federal level, there are a few important policies to be aware of that prop up renewable energy adoption and development.

The federal renewable energy Investment Tax Credit (ITC) can be applied to residential and commercial solar energy system installations, and currently amounts to 30 percent of the total cost of installation. This percentage steps down through 2022, when it goes away completely for residential systems and permanently stays at 10 percent for commercial.

The federal Production Tax Credit (PTC) is a primary incentive for large-scale renewable energy procurement. It applies to wind power, some biomass plants, and geothermal power and provides operating facilities with a per kilowatt-hour (kWh) monetary incentive for the first 10 years of its lifetime. The PTC has been a primary driver for the development of wind energy capacity in the United States. It begins phasing out in 2021.

More and more often, individual states are taking the lead when it comes to renewable energy policies. Many states have a renewable portfolio standards (RPS), which requires a certain percentage of a state’s electricity consumption must come from renewable energy sources. Currently, 29 states and Washington D.C. have renewable portfolio standards in place, and an additional 8 states have non-binding or voluntary standards enacted. Some state RPS guidelines even include more specific requirements for individual renewable sources, such as solar carve-outs.

The economics of renewable energy

Besides being environmentally-friendly, there are many important economic benefits that come along with renewable energy sources. Learn what makes clean energy a positive force for economies everywhere, from low-cost energy to job creation.