Save money by installing solar panels in ME.

Solar isn't just for the Southwest – high electricity costs mean that Mainers can save hundreds on their bills when they go solar. 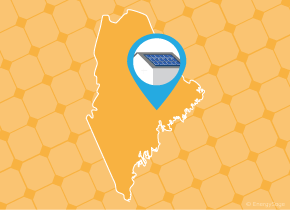 With an abundance of natural features, from the inland 100 Mile Wilderness to the coastal islands of Acadia National Park, the Northernmost state has plenty of impetus to preserve its beloved sites. While policy for renewables, and solar in particular, has fluctuated historically, the state’s current governor has approached solar adoption with renewed vigor, making Maine a great place to go solar.

How much do solar panels cost in Maine?

Regardless of the exact cost of installation, there are many affordable financial options for solar panel systems. Cash purchases are one common method to pay for solar and often lead to the most long-term value for your money. If an upfront purchase isn’t right for you, solar loans and solar lease/PPAs are available to help finance a solar energy system.

See the complete list of top solar installers in Maine

See the cost of solar in ME cities and towns

What solar panels should I install in Maine?

How much energy can I get from solar in Maine?

Aside from the power output of the solar equipment you choose to install, the amount of energy you generate with solar panels in Maine is directly related to the amount of sunlight that hits your panels. As with other states in the Northeast, Maine does not receive nearly as much sunlight as the rest of the country; however, the state still receives enough peak sun hours to make a solar panel system a good investment option for property owners.

Solar incentives in Maine can help you reduce the overall price of going solar. Learn more about why solar panels are such a great investment in Maine.

Learn about solar incentives in ME

What rebates and incentives are there in Maine for solar?

Besides the federal ITC, Maine provides additional incentives for going solar that are dependent on your area and utility company. Maine maintains a renewable portfolio standard, which it aims to meet in part through providing solar incentives for home- and business-ownders. Additionally, inexpensive loans through Property Assessed Clean Energy (PACE) and community shared solar models help Maine make a name for itself in the solar energy sector. To learn more about Maine’s best financial incentives for solar, check out our complete overview of the state’s best solar incentives.

While Maine has a long history of producing electricity with renewable resources, solar in the state has seen a mixed history. For instance, although Maine developed an energy portfolio with three-quarters of its electricity generation coming from renewable energy sources such as wind, hydro and biomass energy, the growth of the solar energy industry in-state has occurred a touch slower. In fact, as of the end of 2018, Maine had only installed about 50 MW of solar capacity, placing it 42nd on SEIA’s national rankings. However, the state recently reinvested in the success of the industry, which promises to see a successful expansion in the coming years.

Following the oil crisis in the 1970s, many states took action to create a more resilient energy portfolio, such as encouraging solar installations. Maine was one of the first states to partake, as their first solar policy–Solar Easements–passed in 1981. While there was no financial incentive directly involved with this policy, the property regulation was an important first step for the industry as it guaranteed residents that they would have ensured access to direct sunlight for a solar project.

Maine pushed further forward towards diversifying its energy mix by implementing net metering in 1987. At the time, the energy billing credit arrangement was not widely accessible for residents as it was only available for owners of qualified combined heat and power systems. However, following its 1997 electric utility restructuring law, Maine would fully transform and integrate a variety of programs into the state to spur a competitive, diverse energy market. For example, net metering was immediately amended to include technologies like solar, providing a boost to the industry. Net metering policy was a fixture in Maine for years before being converted to a “gross metering” policy in 2017: a distributed generation buy-all, sell-all program that stirred much controversy both within and outside the state. In 2019, though, Governor Mills spearheaded the state to reinstate net metering policies, rejuvenating the state’s stalled solar industry.

The 1997 electric utility restructuring act also led to the Renewable Portfolio Standard (RPS) program and the Efficiency Maine Trust. Over time, the RPS program has arguably been the most significant policy in developing Maine’s renewable energy market. From the very beginning the state laid out an aggressive plan that mandated utilities to provide at least 30 percent of their electricity from eligible renewable resources by 2017. Since then, the percent required by the RPS increased to 40 percent by 2022 and now requires more stringent forms of renewable energy development, which should likely help solar continue to grow. The creation of the Efficiency Maine Trust also further incentivizes development in solar and renewables. Although funding comes voluntarily from customers and from Alternative Compliance Payments from utilities that have not met RPS requirements, the Trust has implemented some very useful grants and rebates throughout its time. The Trust previously offered rebates for solar and wind technologies; however, as of 2015, the administration ran out of funds for such a program.

While a majority of Maine’s key solar policy legislation came in 1997 and were revised over time, the state has figured out additional ways to make solar more accessible. For instance, the passage of Solar Rights in 2009 further safeguarded installations from homeowners associations or obtrusive parties seeking to restrict solar. Additionally in 2009, Maine began operating community solar farms, which have continued to grow over the years and allow residents to purchase solar without installing it on their roofs. Furthermore in 2011, Maine joined in on offering Property Assessed Clean Energy (PACE) Loans for its residents, which offer up to $15,000 for 15 years at a 4.99 APR rate for energy upgrades.

Most recently in 2019, Maine enacted new legislation that is more supportive of renewable energy development - from solar targets to reinstating net metering. It has become clear that this Governor’s priority is to make solar more available to Mainers. Based on the state’s history of renewable development, this recent surge solar energy policy is promising sign that Maine’s solar industry is finally here to stay.