Save money by installing solar panels in MO.

Utility solar energy rebates and significant environmental benefits mean that homeowners in the Show Me State are all about solar power. 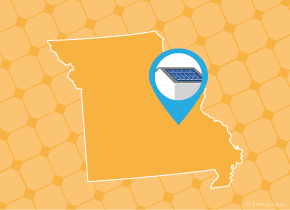 The solar energy incentives in Missouri have helped this Midwest state to gain recognition for more than the famous Gateway Arch. Missourians now have access to a wide variety of solar energy rebates from their utilities and solar homeowners in Missouri are provided a solar property tax exemption. Going solar is an easy decision with all of the solar incentives the Show Me State has to offer.

How much do solar panels cost in Missouri?

See the complete list of top solar installers in Missouri

See the cost of solar in MO cities and towns

What solar panels should I install in Missouri?

How much energy can I get from solar in Missouri?

Aside from the power output of the solar equipment you choose to install, the amount of energy you generate with solar panels in Missouri is directly related to the amount of sunlight that hits your panels. Fortunately for homeowners in Missouri, the Show Me State ranks in the top half of all US states for average peak sun hours, with almost 5 peak hours of sunlight per day.

Solar incentives in Missouri can help you reduce the overall price of going solar. Learn more about why solar panels are such a great investment in Missouri.

Learn about solar incentives in MO

What rebates and incentives are there in Missouri for solar?

Besides the federal ITC, Missouri has additional incentives for going solar that are dependent on your area and utility company. Of note is the wide availability of solar rebate programs such as: Columbia Water and Light, Kansas City Power and Light, and Empire District Electric solar rebates. Additionally, Missouri offers solar property tax exemption. To learn more about Missouri’s best financial incentives for solar, check out our complete overview of the state’s best solar incentives.

Missouri has undertaken major steps to transition towards a clean energy state. In fact, the fastest growing job for Missouri residents in from 2017 to 2019 was solar panel installer, according to projections from the U.S. Bureau of Labor Statistics. Missouri’s surge in its solar industry catapulted Missouri from 41st in 2017 up to 29th in 2018 in SEIA’s national solar rankings. While decreasing solar costs along with increased consumer demand have been significant aspects of this rapid growth, the Show Me State deserves a lot of credit for crafting effective solar policies that have and will continue to support the clean energy industry.

The first solar policy enacted in Missouri dates back to 1979, when the state implemented Solar Easements & Rights Laws. Although this policy didn’t focus on financial incentives, it recognized that solar energy usage is a property right, legitimizing the use of the technology throughout the state.

In the mid-2000s, Missouri renewed its interest in solar and began to implement further solar policy laws. The most transformative policy that Missouri passed is their net metering program, which the state enacted in 2007. Net metering mandates that utilities credit any net excess generation to customers with solar energy systems up to 100 kilowatts (kW). In Missouri, residents only receive the avoided cost rate, rather than the higher retail rate (as is the case in other states), for being net energy exporters. Regardless, net metering remains a key fixture in Missouri’s collection of solar policy.

The second instrumental policy that Missouri would pass to encourage solar came only a year later in 2008 when voters approved the Missouri Clean Energy Act, which set a mandatory Renewable Portfolio Standard (RPS). Specifically, this initiative required that state’s utilities to supply 15 percent of their electricity through renewable energy by 2021. Even more importantly for solar energy, the RPS detailed a carve-out for this technology of 0.3 percent by 2021 as well. Besides guaranteeing solar and renewable energy growth in Missouri, the state’s RPS further benefits residents because utilities are compelled to offer financial incentives to go solar so they avoid these harsh fines.

The result is a strong solar rebate program provided by each of the three major state utilities in Missouri. For example, Columbia Water & Light offers solar shoppers in their jurisdiction a payment of $500 per kilowatt (kW) of solar power generation capacity (up to 10kW). For those supplied by Kansas City Power & Light, eligible customers have been able to take advantage of a rebate payment system of up to $1 per watt ($1,000 per kW) of solar power installed on their home. And, finally, Empire District Electric made it easier to go solar by offering customers a solar rebate of up to $2/W ($2,000 per kW), depending on the installation date and rebate application date.

Additionally, Missouri passed additional regulatory incentives to encourage solar development. For instance in 2010, the state enacted Property-Assessed Clean Energy (PACE) financing in order to provide affordable loans for installing systems like solar photovoltaic (PV) panels. Another way the state has improved the economics of solar in state is by passing a Solar Property Tax Exemption in 2013, which relieves homeowners of the increased property taxes associated with installing solar systems.