Save money by installing solar panels in PA.

Going solar in the Keystone State is easier than ever, and Pennsylvanians are saving hundreds on their electricity bills with solar. 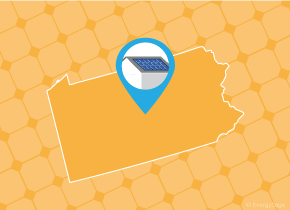 With its long history of producing electricity from coal and nuclear energy, as well as its recent expansion into fracking natural gas, Pennsylvania may not immediately seem like an ideal solar state. However, with state incentives for solar from net metering to solar renewable energy certificates, going solar in the Keystone State is beocming a better and better idea every day.

How much do solar panels cost in Pennsylvania?

See the complete list of top solar installers in Pennsylvania

See the cost of solar in PA cities and towns

What solar panels should I install in Pennsylvania?

How much energy can I get from solar in Pennsylvania?

Aside from the power output of the solar equipment you choose to install, the amount of energy you generate with solar panels in Pennsylvania is directly related to the amount of sunlight that hits your panels. Although Pennsylvania ranks low nationally in terms of both sunny days per year and hours of peak sunlight per day, the state’s solar policies continue to make going solar in state a viable option.

Solar incentives in Pennsylvania can help you reduce the overall price of going solar. Learn more about why solar panels are such a great investment in Pennsylvania.

Learn about solar incentives in PA

What rebates and incentives are there in Pennsylvania for solar?

Over the past decade, the solar industry in the Quaker State has experienced its fair share of highs in lows. As of 2018, SEIA reports that the state ranks a modest 22nd amongst its peers with about 420 megawatts (MW) of installed solar energy capacity statewide. Luckily, Pennsylvania has recently seen an uptick in its solar production, however there is still much room to continue to make solar more accessible to everyone in the Keystone State.

Pennsylvania’s first major solar law came in 1996 through the approval of the state’s electricity restructuring law. Among the many changes implemented in this legislation, one of the provisions was the establishment of clean energy public benefits programs, which created four separate funds with the purpose of promoting sustainable and renewable energy development. Funded by small surcharges on ratepayers’ utility bills, the Sustainable Energy Fund has provided more than $20 million in loans and $1.8 million in grants to over 100 projects. At present, thes tate is transitioning these four funds toward a revolving loan and investment fund model to better allocate capital.

Pennsylvania adopted one of its most influential solar policies almost a decade later in 2004, with the Alternative Energy Portfolio Standard (AEPS) program. Across the country, state energy requirements have been instrumental to the development of clean energy. In the Quaker State, the AEPS requires electric utilities to supply 18 percent of their energy from alternative energy by 2021; however, only 8 percent has to be from Tier 1 renewables, such as solar, while the rest can come from less environmentally friendly resources labeled as Tier 2. The AEPS does promote the solar industry with a solar carve-out of 0.5 percent of the goal.

One of the better financial incentives available to Pennsylvania residents is the Solar Alternative Energy Credit (SRECs) system, which began with the creation of the AEPS program. For residents, SREC payments are a solid financial incentive to go solar: as of early 2016 the going rate for these credits in the state was about $15 per megawatt hour (MWh) of solar.

No discussion of solar policies in Pennsylvania would be complete without a review of the state’s net metering program, originally enacted in 2006. Net metering is an energy billing system that provides homeowners credit based on how much net surplus generation is sent back to the electric grid. In the Keystone State, policymakers have maintained a very strong program by compensating excess solar energy at the higher retail rate month to month. Additionally, the program is very inclusive by allowing system capacities of up to 50 kW to be eligible for compensation. Finally, if a surplus is run for a full year, the registered utility will cut a check to the homeowner, at a slightly lower “price-to-comparison” rate, providing an additional perk for going solar.

The last notable statewide solar incentive in Pennsylvania is the PA Sunshine Solar Rebate Program that was created in 2009, but expired soon after in 2013. Prepared with a budget of $100 million, the PA Department of Environmental Protection administered these funds to slash the cost of solar through rebates as high as $0.75/W for residential solar installations, a generous rebate for solar. Solar development jumped as residents flooded the market to take advantage of this opportunity, which quickly resulted in the program running out of funds.