Save money by installing solar panels in TX.

With some of the strongest sunshine in the country and lower-than-average solar costs, the Lone Star State is a great state for solar. 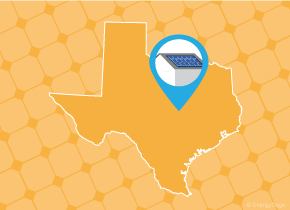 As the heart of America’s energy industry, Texas plays an outsize role in all electric industry trends. While the state has installed a considerable amount of solar to date, solar only provides a small portion of the state’s total energy. Nevertheless, with strong solar incentives–such as utility solar rebate programs, renewable energy property tax exemptions, and feed in tariffs for solar–going solar in the Lone Star state has never been easier.

How much do solar panels cost in Texas?

See the complete list of top solar installers in Texas

See the cost of solar in TX cities and towns

What solar panels should I install in Texas?

How much energy can I get from solar in Texas?

Aside from the power output of the solar equipment you choose to install, the amount of energy you generate with solar panels in Texas is directly related to the amount of sunlight that hits your panels. Fortunately, Texas has some of the strongest sunshine and receives high average peak sun hours, making it easier for your solar panels to save as much money as possible.

Solar incentives in Texas can help you reduce the overall price of going solar. Learn more about why solar panels are such a great investment in Texas.

Learn about solar incentives in TX

What rebates and incentives are there in Texas for solar?

Besides the federal ITC, Texas has additional incentives for going solar that are dependent on your area and utility company. Of note are solar rebate programs through Austin Energy, CPS Energy, Oncor, and other companies. Additionally, Texas has renewable energy systems property tax exemption and net metering availability. To learn more about Texas’ best financial incentives for solar, check out our complete overview of the state’s best solar incentives.

Solar energy has an interesting history in the Lone Star state. While the state ranks 5th on SEIA’s 2018 national rankings with nearly 3,000 megawatts (MW) of solar capacity deployed, solar advocates feel the state’s solar industry has much room to grow. In fact, only 0.85 percent of the state’s electricity comes from solar, demonstrating the massive potential for solar in Texas.

The state’s first solar policy came in 1981, when the state issued a Renewable Energy Systems Property Tax Exemption. The policy ensures homeowners they would be exempt from the increased property tax value from their energy installations such as solar panels. Texas quickly followed up with another piece of solar legislation with the adoption of Solar Rights in 1982. Although the policy didn’t focus on financial incentives, it recognizes solar energy usage as a property right and ensures that proper sunlight is made available to those who operate solar-energy systems.

Texas passed no further solar policies until 1999, when the state’s electric-utility restructuring legislation implemented their first renewable portfolio standard (RPS). Across the country, state energy requirements have been instrumental to the development of clean energy, including in Texas. The state’s original goal required utilities to supply 5,880 MW–or 3 percent of their electricity sales–with renewable energy by 2015. The state set a further voluntary goal of 10,000 MW of renewables by 2025. With the state’s abundant natural resources, both goals have already been easily met, mostly through wind power, with no new, more ambitious RPS passed to date.

The most rewarding solar policies for residents in Texas are the multitude of rebates offered by utilities that have been available since the late 2000s and early 2010s. Despite no statewide rebate program an already-met RPS requirement, large and small utilities offer some attractive incentives for going solar. For example, customers of Austin Energy are eligible for a generous $2,500 rebate when they install solar panels. Another example is CPS Energy’s rebate of up to $1.20/W. Lastly, Oncor provides eligible homeowners with a cash rebate of $538.83/kilowatt, or approximately $0.54/W. Overall, these rebates provide solid incentives for Texan solar residents.

On the downside, Texas has no statewide net metering program. Net metering programs have been crucial for the solar energy industry by allowing residents to send surplus net energy to the electric grid and receive compensation for it on their energy bill. In Texas, individual utilities offer feed-in tariffs to customers for every kilowatts-hour (kWh) a solar panel generates, as a way to still provide compensation for solar generation. Austin Energy, for instance, began offering a $0.097 kWh compensation rate for solar generation in 2004. Similarly, Green Mountain Energy – Renewable Rewards Program provides a compensation rate close to the retail value of electricity to its solar customers.