Save money by installing solar panels in MI.

Solar energy systems are more popular than ever in the Great Lakes State, proving that solar power isn't just for the Southwest. 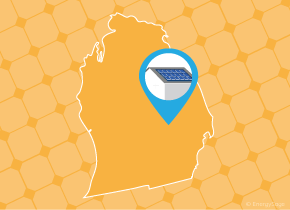 Michigan is home to more than 11,000 inland lakes, earning its tile as the Great Lake State. Maintaining the natural beauty of the state is one of Michigan’s goals, and excellent solar innovation has helped uphold this goal. The progressive government of Michigan has allowed the state to maintain its place as a leader in solar energy despite its standing as a cold and snowy state. Michigan has been able to sustain this reputation through programs like solar investment tax credit and home energy loan programs. Michigan should continue to be a beacon of light for solar energy for years to come.

How much do solar panels cost in Michigan?

See the complete list of top solar installers in Michigan

See the cost of solar in MI cities and towns

What solar panels should I install in Michigan?

How much energy can I get from solar in Michigan?

Aside from the power output of the solar equipment you choose to install, the amount of energy you generate with solar panels in Michigan is directly related to the amount of sunlight that hits your panels. The Great Lakes State receives an average of 4 peak sun hours per day, though improving solar technology and beneficial tax credits continue to make solar a viable option for homeowners in state.

Michigan is becoming known for its great solar incentives and programs, which are considered some of the best in the country. Learn more about why solar panels are such a great investment in Michigan.

Learn about solar incentives in MI

What rebates and incentives are there in Michigan for solar?

Besides the federal ITC, Michigan has additional incentives for going solar that are dependent on your area and utility company. With Michigan’s liberal solar investment tax credit and home energy loan program, it has never been a better time to go solar. To learn more about Michigan’s best financial incentives for solar, check out our complete overview of the state’s best solar incentives.

As of 2019, Michigan had installed nearly 150 megawatts (MW) of solar energy capacity, placing the state 30th on SEIA’s national ranking. The Great Lake State can largely attribute their current position to growth in the industry over just the past few years. While decreasing solar costs and steadily high in-state electricity prices have contributed to this growth in solar, Michigan’s solar policies have also played an important role in influencing the industry’s recent development.

Much of Michigan’s policy history exists in 2008 alone, when policymakers established both the Renewable Portfolio Standard (RPS) and net metering program. These two regulatory policies have been particularly successful in advancing the growth of renewable and solar energy throughout the country: roughly half of all growth in U.S. renewable electricity generation and capacity since 2000 has been associated with state RPS requirements.

Michigan’s RPS originally specified that utilities were required to generate 10 percent of their retail electricity sales from renewable energy resources by 2015. In 2015 lawmakers revised the legislation upwards, mandating that utilities must source 15 percent of their electricity from renewable energy by 2021. While utilities can choose from a variety of eligible sources under the state’s RPS, the solar industry’s projected growth over the next several years indicates that solar has an important role to play in meeting the state’s RPS target.

Michigan’s net metering program previously required utilities in the state to offer retail rate prices to compensate property owners’ net excess generation. However, a 2018 ammendment altered the original net metering program to an “inflow/outflow” system, which only compensates excess energy sold back to the grid at the much lower wholesale or avoided cost rate. Solar advocates have pushed back against this legislation for some time now and will continue to fight to ensure that homeowners receive a fair value for their excess energy sold back to the grid.

Beyond the seminal solar legislation enacted in 2008, the state has experimented with other unique methods to encourage further solar growth. For instance, in 2009, the state’s Public Service Commission created and funded a non-profit organization known as Michigan Saves, which became independent and operational in 2011. The program functions as a green bank that relies on public grants to appropriately leverage private investment in energy efficiency and renewable energy systems throughout Michigan. One of its trademark offers for residents is the affordable Home Energy Loan Program for installing solar systems: these loans finance up to $30,000 in solar costs with an annual rate as low as 4.99 percent.

Most recently, the state’s utilities have approved more utility-scale solar farms, which helps ensure more residents in Michigan have access to solar power. In January 2019, the Shiawassee County Planning Commission approved the largest proposed solar farm in Michigan that is projected to generate up to 239 MW of solar power, or enough to power 35,000 Michigan homes.