Save money by installing solar panels in VT.

As a result of high electricity rates and strong solar incentives, it's easy for property owners in the Green Mountain State to see the benefits of solar. 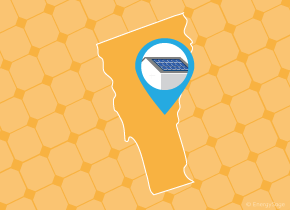 The Green Mountain State has plenty of natural beauty to protect, so it should come as no surprise then that Vermont is a national and regional leader in clean, renewable, solar energy. Vermont continues to incentivize people to go solar with an ambitious Renewable Portfolio Standards, a strong net metering program and significant tax breaks for solar investment.

How much do solar panels cost in Vermont?

See the complete list of top solar installers in Vermont

See the cost of solar in VT cities and towns

What solar panels should I install in Vermont?

How much energy can I get from solar in Vermont?

Aside from the power output of the solar equipment you choose to install, the amount of energy you generate with solar panels in Vermont is directly related to the amount of sunlight that hits your panels. While sunlight is not always plentiful in the Northeast, Vermont residents should feel fortunate that the state offers strong financial incentives for going solar.

Solar incentives in Vermont can help you reduce the overall price of going solar. Learn more about why solar panels are such a great investment in Vermont.

Learn about solar incentives in VT

What rebates and incentives are there in Vermont for solar?

Besides the federal ITC, Vermont has additional incentives for going solar that are dependent on your area and utility company. Of note are community shared solar, net metering availability, and generous tax breaks. To learn more about Vermont’s best financial incentives for solar, check out our complete overview of the state’s best solar incentives.

Against all odds, Vermont holds its own against the rest of the country’s solar markets: as of the end of 2018, Vermont has installed nearly 300 megawatts (MW) of solar energy capacity, ranking the state 25th on SEIA’s national rankings. Even more impressive has been the steady growth of solar over the last decade alone, led in large part by robust in-state solar policy.

Vermont’s first solar policy, the Local Property Tax Exemption, passed in 1975 to exempt homeowners of the additional property taxes that come with a solar installation, if permitted by their city or town. In 2013, the Uniform Capacity Tax and Exemption for Solar revised the original legislation to fully exempt the property taxes for all solar systems up to and including 10 kilowatts (kW). Another tax break for solar residents followed in 1999, with a Renewable Energy Systems Sales Tax Exemption. With a state sales rate tax of 6 percent, this policy plays a significant role in reducing solar costs.

In 1998, Vermont introduced net metering, which has been crucial for the solar energy industry nationwide by allowing residents to send surplus net energy to the electric grid and receive compensation for it on their energy bill. Net metering in the Green Mountain State has been revised several times, including most recently in 2017. Previously, utilities provided compensation for excess solar generation at the retail rate, rather than the wholesale or avoided-cost rate used in other state net metering programs. Today, Vermont offers a blended residential retail rate, which is typically in the range of the retail rate for electricity.

The last notable change emerging from the 2017 net metering amendment is group net metering, which allows residents to participate in an off-site shared solar installation and still earn credits to reduce their electricity bill. This policy is paramount for the growth of community solar in the state.

Net metering and REC compensation are not the only policies and incentives that have supported the solar industry in Vermont. For instance, in 2003 policymakers enacted the small-scale renewable energy incentive program (SSREIP), which provided substantial rebates to residents for going solar. However, funding for this program officially expired in 2013.

Additionally, Vermont adopted Renewable Energy Rights in 2009: although the policy doesn’t focus on financial incentives, it recognizes solar energy usage as a property right and ensures that proper sunlight is made available to those who operate solar-energy systems.

Aside from the aforementioned policies, the most important policy for the renewable industry in Vermont is the state’s mandatory renewable portfolio standard (RPS), introduced in 2015. Similar to net metering, state energy requirements have been instrumental in the development of clean energy across the nation, as has been the case in Vermont. At first, the Green Mountain state passed the Sustainably Priced Energy Enterprise Development (SPEED) program in 2007, which set a voluntary goal for utilities to supply 20 percent of electricity from renewables by 2017. However, as the SPEED program was set to expire, state legislators penned and passed a mandatory RPS program that now calls for 75 percent from renewables by 2032, easily one of the strongest such policies in the country. While Vermont already generates 11 percent of its electricity from solar energy, solar energy in-state should continue to increase as Vermont works to meet its ambitious renewable target.