Save money by installing solar panels in MD.

Solar power is more popular than ever in the Old Line State thanks to some of the most generous solar incentives in the country. 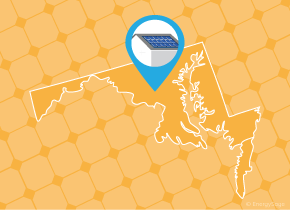 This beautiful Mid-Atlantic state is full of beaches, hiking, and historical sites. With an early jump on renewables, Maryland has made a name for itself in the solar community. Maryland boasts an impressive RPS, strong net metering, and solar power tax benefits. The solar incentives in Maryland make investing in solar an easy choice for energy-conscious consumers.

How much do solar panels cost in Maryland?

See the complete list of top solar installers in Maryland

See the cost of solar in MD cities and towns

What solar panels should I install in Maryland?

How much energy can I get from solar in Maryland?

Aside from the power output of the solar equipment you choose to install, the amount of energy you generate with solar panels in Maryland is directly related to the amount of sunlight that hits your panels. Maryland ranks in the middle of peak sun hours among U.S. states, with 105 clear days per year, and 4.47 hours of sun per day.

Solar incentives in Maryland can help you reduce the overall price of going solar. Learn more about why solar panels are such a great investment in Maryland.

Learn about solar incentives in MD

What rebates and incentives are there in Maryland for solar?

Besides the federal ITC, Maryland has additional incentives for going solar that are dependent on your area and utility company. Maryland offers net metering and tax incentives to boost solar production power in the state. Policies such as the solar rebate program and property or sales tax exemptions help reduce up-front costs and yield a larger cost benefit over time in Maryland. To learn more about Maryland’s best financial incentives for solar, check out our complete overview of the state’s best solar incentives.

In the Free State, solar energy has flourished as a significant industry over the last few years. Currently, the state ranks 14th in SEIA’s national rankings with a total solar energy capacity of more than 1,000 megawatts (MW). However, such an achievement for a modest-sized state did not happen overnight. In fact, Maryland was an early proponent of enacting solar legislation even back in the 1980s prior to most other states acting on solar.

As the solar industry began to emerge, states interested in harnessing this technology understood that they needed to define clear market laws for their residents to live by. Maryland was one of the states to take the lead in this field by implementing solar easement and rights laws in 1980. Specifically, this policy ensures that property owners have the right to install solar collection panels without having to worry about land use covenants imposing limitations on their investment. This policy is important for a primary reason: it establishes that solar is treated as seriously as an individual’s property rights. Maryland would later enhance the language of these rights in 2008 providing additional detailed protections for solar energy systems.

While Maryland would go on to pass some additional policies for renewable energy in the 1980s and 1990s, the most significant law passed during the time period was net metering in 1997. Throughout the nation, net metering has been one of the most crucial policies for developing renewable and solar energy. This is because electric companies are required to credit owners who generate surplus kilowatt-hour (kWh) solar energy at the market rate toward future utility bills. This means solar investors get to receive full credit for the energy generated by their solar panels. Maryland continues to update the net metering program, as the state increased the cap size limits and introduced a pilot virtual net metering program for community solar systems. As it stands today, the Free State has established one of the strongest net metering programs in the nation.

Maryland continued to seriously develop its solar and renewable energy industry by establishing its own Renewable Portfolio Standard (RPS) in the 2000s. Established in 2004, the original regulatory mandate specified that electricity suppliers in the state must procure 7.5 percent of their electric retail sales with eligible renewable energy supplies by the year 2019. Maryland has continued to push to increase its commitment to clean energy by revising its program multiple times. The latest amendment to the RPS passed in 2017, when policymakers agreed that by 2020 utilities must supply 25 percent of their electricity from renewable energy.

Maryland’s RPS program is especially recognized by the solar industry for including a carve-out for the technology back in 2007. As the RPS mandate has increased, so has the solar carve-out, which today stands at 2.5 percent by 2020. To enforce this regulation, the state organized a Solar Renewable Energy Credit (SREC) system in 2015 that allows residents to sell credits for their solar production back to the utility. (Importantly, SRECs and net metering are different policies that both compensate for different aspects of solar production.) The utility ultimately has to buy the SREC or face the higher-priced Solar Alternative Compliance Payment (SACP) instead. The result is a great financial incentive for residents to partake in because they can reap significant earnings for their solar production.

Maryland’s solar policy has focused on more than just its net metering and RPS programs. In 2004, the state laid out a variety of financial incentives that further strengthened the solar industry. For example, the Residential Clean Energy Grant Program that was enacted in 2004 provides a flat $1,000 rebate for a solar photovoltaic (PV) installation from 1-20 kW. Additionally, Maryland reduced solar costs for residents by implementing the Property Tax Exemption for Solar & Wind Systems in 2007 as well as the Sales & Use Tax Exemption for Renewable Energy Equipment in 2008. Overall, Maryland’s solar policy history exemplifies a clear, concise commitment towards transitioning to a cleaner and healthier state for its people to live in.