Save money by installing solar panels in MN.

Thanks to some of the most significant financial incentives in the country, solar is more popular than ever in the Land of 10,000 Lakes. 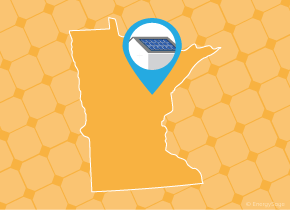 Solar capacity is expanding rapidly in the Land of 10,000 Lakes. A combination of favorable state solar and renewable policies, in addition to utility-specific action on solar, have contributed to Minnesota becoming a top-15 solar state. From well-established net metering programs to a strong renewable portfolio standards, from tax exemptions and credits to a utility’s commitment to 100 percent renewables, Minnesota is a state to watch for solar in the coming years.

How much do solar panels cost in Minnesota?

See the complete list of top solar installers in Minnesota

See the cost of solar in MN cities and towns

What solar panels should I install in Minnesota?

How much energy can I get from solar in Minnesota?

Aside from the power output of the solar equipment you choose to install, the amount of energy you generate with solar panels in Minnesota is directly related to the amount of sunlight that hits your panels. Minnesota boasts 5.43 hours of peak sun during the summer, less than other key solar markets throughout the country, but more than enough to power your home with with solar.

Solar incentives in Minnesota can help you reduce the overall price of going solar. Learn more about why solar panels are such a great investment in Minnesota.

Learn about solar incentives in MN

What rebates and incentives are there in Minnesota for solar?

Besides the federal ITC, Minnesota has additional incentives for going solar that are dependent on your area and utility company. Of particular note are net metering and cash incentives, including the state sales tax exemption and federal investment tax credit. Additionally, Minnesota’s utility-specific solar programs such as the Xcel Energy Program and SolarSense provide some of the best utility solar incentives in the country. To learn more about Minnesota’s best financial incentives for solar, check out our complete overview of the state’s best solar incentives.

While many people may not think of Minnesota as a likely leader in solar energy, the Land of 10,000 Lakes has worked diligently over the past few decades to help establish a robust solar market. Over the past few years in particular, Minnesota’s commitment to solar has begun to pay dividens, as the state sits in 13th in SEIA’s national rankings as of 2029, having installed more than 1,000 MW of solar in-state.

Minnesota began promoting solar in 1978, when lawmakers passed the Solar Easement and Rights Laws. From there, Minnesota introduced net metering shortly thereafter in 1983, allowing solar owners to be compensated for excess solar generation placed on the grid. Minnesota’s net metering policy is amongst the best in the nation for residential systems under 40 kW, as excess generation is compensated at the retail rate, rather than at the lower wholesale or avoided cost rate.

Following these early pieces of legislation, Minnesota introduced solar grants and incentives to augment the early solar policies in the early 2000s. To aid customers going solar, Minnesota implemented a Solar Energy Sales Tax Exemption that saves residents nearly 7 percent on purchasing solar installations. Additionally, the creation of the Renewable Development Fund (RDF) administered its first round of grants in 2001 to support renewable energy production incentives. Over the lifetime of the RDF, Minnesota has awarded over $100 million in grant funds to aid in increasing renewable development.

One of the more favorable incentives born from the RDF was Xcel Energy’s Solar Rewards program, which paid 8 cents per kWh of solar power production annually for up to 10 years to customers who installed solar between 2014 and 2018. A similar, utility-led incentive from Minnesota Power–SolarSense Rebate Program–also received its start in the early 2000s. To this day, the utility offers a lottery-selected rebate for customers that compensates up to 60 percent of the cost of a solar installation.

Minnesota’s major breakthrough on renewable energy occurred in 2007, when the state enacted the Renewable Portfolio Standard (RPS). The original legislation requires utilities to supply at least 25 percent of retail electricity sales from renewable energy by 2025, with a higher standard of 31 percent for Minnesota's largest utility, Xcel Energy. In large part as a result of the strong RPS, many utilities began offering rebates to solar customers in order to meet their compliance levels.

Additionally, in 2013 the state’s RPS was revised to include a solar carve out, requiring 1.5 percent of the state’s electricity to come from solar by 2020. The solar carve out made solar much more accessible to Minnesota’s residents, as it led to even more solar-specific rebate programs, such as Made in Minnesota.

While Minnesota has already realized a wide variety of policies to incentivize going solar, the state continues to support the industry. For instance, in 2014, Minnesota launched the solar garden program through Xcel Energy. The program makes going solar incredibly easy for all residents, but allowing for virtual net metering, a policy that allows utility customers to receive net metering credits for solar by subscribing to off-site solar installations.

Finally, at the end of 2018, Minnesota’s largest utility, Xcel Energy, committed to 100 percent carbon-free generation of electricity by 2050. This ambitious target is one of the first of its kind for any utility in the country, and will surely require a continued commitment to solar energy in the state of Minnesota.