Save money by installing solar panels in NV.

There’s more to the Silver State than just the Las Vegas Strip – abundant sunshine means Nevada is one of the top states for solar. 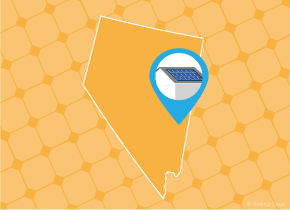 With Reno and Las Vegas lighting up Nevada, solar energy is in high demand in the Silver State. Plenty of sun and great incentives–such as the NV Energy renewable generations rebate program, net metering, and solar access laws–are a few of the reasons why so many Nevadans have made the switch to solar. It’s no wonder that the Solar Energy Industries Association ranked Nevada as number 5 in its Top 10 Solar States.

How much do solar panels cost in Nevada?

See the complete list of top solar installers in Nevada

See the cost of solar in NV cities and towns

What solar panels should I install in Nevada?

How much energy can I get from solar in Nevada?

Aside from the power output of the solar equipment you choose to install, the amount of energy you generate with solar panels in Nevada is directly related to the amount of sunlight that hits your panels. Fortunately, Nevada has one of the highest peak sun hour averages, with over seven hours of peak sun per day in the summer! This should make it easier for your solar panels to rack up energy and save more money for you over your system’s lifetime.

Solar incentives in Nevada can help you reduce the overall price of going solar. Learn more about why solar panels are such a great investment in Nevada.

Learn about solar incentives in NV

What rebates and incentives are there in Nevada for solar?

Besides the federal ITC, Nevada has additional incentives for going solar that are dependent on your area and utility company. Of note are the NV Energy renewable generations rebate program and Nevada’s solar access laws. Additionally, Nevada has established a great net metering program that makes purchases for solar panels or community solar a great deal. To learn more about Nevada’s best financial incentives for solar, check out our complete overview of the state’s best solar incentives.

In recent decades, the Silver State has made a safe bet by investing in policies that support the solar energy industry. As solar costs have dropped and demand has increased, the state has become a perennial leader in solar development and capacity. According to SEIA’s national ranking, through 2018 Nevada has installed over 3,000 megawatts (MW) of solar electricity capacity ranking it 4th overall in the nation.

The first enacted solar policy in Nevada dates back to 1983, with the passage of the Renewable Energy Systems Property Exemption Tax. While this legislation only served commercial and industrial property owners, it set a strong initial step towards attracting more solar development throughout the state. Following this early victory, solar policy in Nevada remained silent until 1995, when the state approved Solar Easement & Rights Laws. The purpose of this policy was to establish that the right to use solar energy is equivalent to a property right. Although this policy doesn’t provide any financial incentives, it legitimized solar and the solar industry in the Nevada market.

However, development seriously picked up following the 1997 electric-utility restructuring legislation in which significant programs–such as net metering and a Renewable Portfolio Standard (RPS)–were integrated into Nevada’s solar policy portfolio.

Nevada has fought tirelessly over the years to maintain one of the top net metering programs in the nation. Net metering is an energy billing system that provides homeowners credit based on how much net surplus generation is sent back to the electric grid. In the Silver State, net metering has been amended every other year starting back in 2001. While these amendments have generally been used to bolster the program, in 2015 net metering took a step back when the state’s Public Utilities Commission (PUCN) allowed NV Energy to charge all solar customers 40 percent more in fixed fees while reducing the price at which excess generation is metered by 50 percent. After a two year debate about the future of net metering in the state, Governor Sandoval signed AB 405 in March 2017 to help turn the state back into a leading solar market.

For customers of NV Energy, the most recent legislation states that photovoltaic (PV) systems of up to 25 kilowatts (KW) are eligible for the program and will receive monthly net excess generation credited at a rate equal to 95% of the retail rate. However, for every 80 megawatts (MW) of solar installed in the state, credit values for new customers will decline by 7%, with a minimum credit value of 75% of the retail rate. The State recently announced that the rate had dropped to 81%. (Updates can be found here.)

The other major renewable policy to come from the 1997 electricity restructuring legislation was a Renewable Portfolio Standard (RPS). Similar to net metering, state energy requirements have been imperative to the development of clean energy across the nation. In this case, Nevada has stood out amongst other states by continuing to increase its required renewable energy levels over the years. In 2009, SB 358 passed to require utilities to source at least 25 percent of their retail electricity sales by 2025, including a solar carve-out of 1.5 percent by the same target date. A recent revision to the bill established a new RPS of 50% by 2030 and 100% carbon-free energy by 2050.

To support its net metering and RPS foundational policies, Nevada created a couple of notable financial incentives to help make solar more accessible to everyone. The first of these policies was the Renewable Generations Rebate Program created by NV Energy in 2003. Today, the program offers $0.20 per watt when ratepayers purchase solar systems 25 kW or less. For a typical 5 kW solar system, homeowners can make a healthy $1,000 a year under the current rebate. It should be noted though that as more solar is installed in the state, the value of the rebate will decrease, so now is the time to take advantage of their offer! The other financial incentive that is provided for solar users in Nevada is the Portfolio Energy Credits (PECs) program that began in 2006. The benefit of these credits is that utilities have to buy them in order to satisfy their RPS requirements, or else face state fines. While the value of these credits remain far below the value of the NV Energy rebates, it will be interesting to see how they adjust with the expanded RPS now passed.