Save money by installing solar panels in WI.

Thanks to solar rebates and incentives, more Wisconsinites than ever are saving on their electricity bills with solar panels. 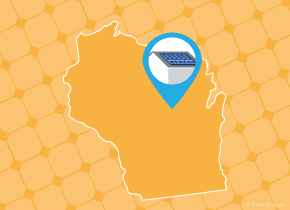 While Wisconsin has earned the nickname Dairyland, the state has much more to offer than cheese. With almost half of the state covered in beautiful forests, Wisconsin offers some of the best renewable energy incentives to help protect the state’s natural resources for generations to come. Among the solar-specific incentives offered in the Badger State are net metering availability, tax incentives, and solar rebates through Focus on Energy.

How much do solar panels cost in Wisconsin?

See the complete list of top solar installers in Wisconsin

See the cost of solar in WI cities and towns

What solar panels should I install in Wisconsin?

How much energy can I get from solar in Wisconsin?

Aside from the power output of the solar equipment you choose to install, the amount of energy you generate with solar panels in Wisconsin is directly related to the amount of sunlight that hits your panels. Wisconsin ranks towards the middle of the states for average peak sun hours. Expected annual energy from your geographical region is important, but it is not the only factor to consider.

Wisconsin is becoming known for its great solar incentives and programs, which are considered some of the best in the country. Learn more about why solar panels are such a great investment in Wisconsin.

Learn about solar incentives in WI

What rebates and incentives are there in Wisconsin for solar?

Besides the federal ITC, Wisconsin has additional incentives for going solar that are dependent on your area and utility company. Of note are solar tax incentives, net metering availability, solar access rights, and solar rebates though Focus on Energy. To learn more about Wisconsin’s best financial incentives for solar, check out our complete overview of the state’s best solar incentives.

For the Badger State, solar energy is just beginning to become a critical part of its future energy plans. Over the past decade, solar has steadily grown, becoming more accessible for the state’s residents. According to the 2018 SEIA national ranking, Wisconsin only ranks 41st in the nation with a total installed solar capacity of just under 70 megawatts (MW). However, SEIA projects that in five years Wisconsin will catapult all the way to 26th on their national ranking, setting the stage for the development of the solar industry in the near future. While decreasing solar costs and environmental concerns have been critical for the solar industry, Wisconsin’s solar policies are paramount to the growth and increased accessibility of solar in the state.

Wisconsin’s first solar policy came in 1982, when the state implemented Solar Rights Laws. Although the policy doesn’t focus on financial incentives, it recognizes that solar energy usage is a property right, legitimizing the use of the technology throughout the state.

Also in 1982, Wisconsin passed its net metering program for customers that generate electricity with solar systems of up to 20 kilowatts (kW). Net metering programs have been crucial for the solar energy industry nationally as they allow residents to export surplus net energy (NEG) to the electric grid and receive compensation for it on their energy bill. In Wisconsin, most utilities offer their ratepayers compensation for excess solar at the retail rate, rather than the lower wholesale or avoided-cost rate offered in other jurisdictions. Additionally, if a NEG credit in Wisconsin exceeds $25, then the utility must issue a check for the amount to the customer.

In 1999, Wisconsin introduced the state’s renewable portfolio standard (RPS) program, which was one of the first passed in the nation. Across the country, state energy requirements have been imperative to the development of clean energy, and the same is true in the Badger State. Wisconsin’s first RPS goal required utilities to supply 10 percent of their electricity sales from renewable energy by 2015. Although the state has not yet updated this target specifically through the RPS, the current governor just signed an executive order establishing a goal of producing 100% emission-free electricity by 2050.

Also in 1999, Wisconsin created the Focus on Energy Program (FOE), a public benefits fund that provides information, financial assistance, technical assistance and other services for energy efficiency and renewable energy. Funding for the program is supported by surcharges on ratepayer’s electricity bills. For solar specifically, FOE offers a $600 rebate for every kilowatt (kW) of solar power installed on a solar system property, all the way up to 4 kW. Focus on Energy also funds the Renewable Energy Competitive Incentive Program, which began in 2011 to offer grants to support the development of large renewable energy projects.