How to save on electric bills with energy efficiency 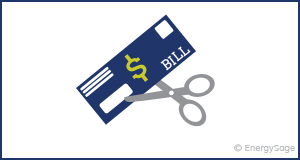 Implementing energy efficient technology and practices in your home can reduce your annual utility bill by anywhere from 5 to 30%, or equivalently $105 to $627 on average. Essentially, your savings are the result of reduced energy demand: homeowners can either directly reduce electricity use by installing more efficient appliances, or prevent unnecessary energy waste lost as heat through improving insulation.

On average, homeowners spend the most on lighting and electricity, space heating, and water heating expenses, costing $827, $593, and $280 per year, respectively. As a result, these technologies are typically the most promising areas for cost-reducing energy efficiency improvements.  However, it is often difficult for the laymen to discern which area is responsible for wasting the most electricity and what actions should be taken. To maximize energy efficiency and potential savings, we recommend hiring a professional energy auditor to pinpoint sources of waste and qualified contractors for installations.

Exogenous factors, which is to say factors other than the supply and demand for electricity, have a strong influence on electricity prices and must be taken into account for future price projections. In particular, environmental regulations and changes in the market for fossil fuels play a large role in determining electricity price movements, while other factors are relatively constant.

Environmental regulations like the Environmental Protection Agency’s proposed Clean Power Plan (CPP) can significantly affect future electricity prices for US residential consumers. The CPP is a proposed EPA regulation that would establish carbon dioxide (CO2) emission reduction guidelines for existing fossil fuel-fired electric generating units. The ultimate goal is to achieve a 35% reduction in national emissions by 2030 compared to 2005 levels.

If implemented, existing power plants would incur transitional compliance costs in the form of fuel and capital expenses from shifting to natural gas-fired generation and expanding renewable energy capacity. Higher operational expenses would then be passed on to the consumer in the form of higher electricity prices. According to the EIA, real retail electricity prices are projected to be 1 to 5% higher during the 2022 to 2030 CPP compliance period as compared to the “No CPP” business-as-usual scenario. Retail prices will then remain 3% higher after 2030. In the “CPP Extended” case, in which CO2 emissions targets are further reduced after 2030 to a 45% total reduction in emissions by 2040 compared to 2005 levels, electricity prices are forecast to be 6% higher than the “No CPP” case by 2040 due to incremental compliance costs.

Implementation of the CPP is far from certain, and until legal challenges to the emissions reduction regulation are resolved, the EPA is not enforcing it. However, while federal-level environmental regulations have a significant impact on electricity prices, many states have already set renewable energy targets of their own, and are exploring alternate routes to reducing their greenhouse gas emissions in the long term.

These state-level initiatives, along with fluctuations in the supply and demand of natural gas and oil, may also lead to electricity price increases in the future – although it is worth noting these increases would be less significant than if the CPP is implemented.

Save money on your electric bill with community solar

Community solar is a great way to save money compared to rooftop solar. By joining a solar farm project in your area, you can actually save 15 percent on your electricity bill by receiving credits. With community solar, most subscriptions involve no upfront cost, guaranteed savings, and allow you to cancel anytime without any penalty fees. Visit our marketplace to find a participating solar farm near you.