›
‹
Electricity
The electrical grid How do we pay for electricity? The future of electricity
Learn About Solar

In the history of human civilization, few innovations have had as much of an impact on the quality of life worldwide as electricity. In fact, nearly every aspect of modern-day life requires a sufficient, reliable supply of electricity in order to function properly. 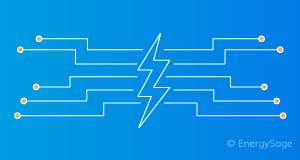 But for how important electricity is, little has been written about how the grid actually works. What follows is EnergySage’s Electricity 101, a comprehensive intro to all things electricity: what it is, how it’s produced and transmitted, how we use it and what the future holds for electricity in the US.

It can be difficult to adequately and simply summarize “electricity”. The term includes everything from the massive power plants that keep society humming to the individual synapses between neurons in our brains that allow us to think and move.

At its core, electricity is the movement of charged particles at the atomic level.

Returning quickly to high-school chemistry, atoms are composed of three primary components: electrons, protons and neutrons. Electrons, which carry a negative charge, can be pried loose–or “freed”–from an atom in order to carry that charge into a neighboring atom. Fundamentally, this is what electricity is: the movement of charged electrons from one atom to another.

How is electricity made?

Creating electricity requires finding a way to coerce a current to move through a wire. The easiest way to do this is with a device you’ve likely made in a high-school physics class: an alternator. Alternators consist of a magnet placed inside a coil of wire, using the rotation of the magnet to induce an electrical current in the wire. The alternator functions by harnessing the rotation of the magnetic field of the magnet: if you spin the magnet fast enough, the changing magnetic field creates electricity.

On the electric grid, electricity is made much the same way: power plants are basically super-sized versions of this elementary science experiment. As described in greater detail in our Electrical Generation section, the goal of power plants is to spin a turbine to create electricity. Historically, this means burning a fossil fuel to heat water to produce steam to spin a turbine, which is effectively just a very large alternator.

There are two types of usable, current electricity: alternating current (AC) and direct current (DC). In the simplest terms, the difference between AC and DC electricity is that in AC energy, electrons can reverse direction, while with DC energy, the electrons can only travel in a single direction. Along those lines, with AC energy, the voltage can flip–or “alternate”–while the voltage remains constant with DC energy.

Today, there are different applications for both AC and DC energy. Throughout most of the world, AC electricity is the primary form of energy used in homes and businesses: when you plug a charger into a wall socket in your home, the output is AC electricity. However, the energy discharged from batteries–such as those in cell phones or laptops–is DC electricity.

The story of why most of the world relies on AC as opposed to DC energy warrants an entire book; and, in fact, many have been written about the drawn-out “Current War” between Thomas Edison–the inventor of DC electricity–and Nikola Tesla–the innovator of AC electricity. The story of how AC won the Current War comes down to a simple fact: when AC and DC electricity were invented in the late 1800s, electrical losses from transmitting DC electricity were so high that DC generators had to be located within a mile of the end user. AC electricity, on the other hand, could easily (and cost-effectively) be transformed to different voltages, making it ideal for both providing the high-voltage electricity transmitted over long distances as well as the low-voltage electricity that comes out of your sockets.