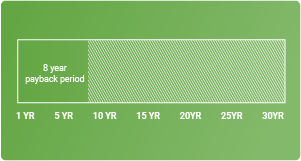 Most people who install solar on their home or business do so for the financial benefits. In that context, it’s important to think about solar as an investment or as a vehicle for long-term savings. With that in mind, there’s one metric–out of the many!–that is best suited for comparing different solar quotes as investments: the solar payback period.


What is a solar payback period?

As with other investments, the solar payback period estimates how long it will take for you to “break even” on your solar energy investment. The payback period for solar is calculated based on the cost of solar, net of any incentives, and the savings you’ll see by avoiding paying for electricity.

As an example, if your solar panel system has a payback period of eight years, this means that your solar panels will save enough on your electricity bills to cover the cost you paid for them in just eight years. But solar panels last for 25 or even 30 years, so after year eight, it’s all gravy: that’s when you’ll truly start to see massive savings from solar, often on the order of tens of thousands of dollars over the next two decades.

How does the payback period work if you loan or lease your system?

In this piece, we talk through the payback period of solar when you pay for solar upfront. But that’s not the only way to pay for a solar panel system: both solar loans and solar leases/PPAs are very popular methods of financing a solar energy system. In the case of a solar loan or a lease/PPA, you pay for solar monthly, as opposed to up front. While you’ll save less money in the long run by paying for solar with a loan or lease, so long as your monthly solar payments are less than what you currently pay for electricity, your payback period for solar is right away: you’ll start saving in month one!

How is your solar panel payback period calculated?

To calculate your solar panel payback period, you need to determine two things: how much you’ll pay for solar (net of any incentives) and how much you’ll save on your electricity bill annually.

How much you’ll pay for solar

The first step in calculating your solar payback period is to determine how much you’ll pay for solar. The cost you pay for your system is dependent upon the size of the system and the equipment that you select.

For the payback period calculation, it’s important to also consider what solar incentives, tax credits, and rebates you’re eligible for, as well as the timing of those incentives: do you receive them upfront, in year one, or over ten years?

How much you’ll save with solar each year

Subtract the value of up-front incentives and rebates from the gross cost of your solar panel system.

Sum your annual financial benefits, including avoided electricity costs and any additional incentives paid out annually, like SRECs or PBIs.

Step 3: Divide your combined costs by your annual financial benefits

The result will be the number of years it will take for you to achieve payback. Every month of savings after your break even point is straight cash!

Comparing quotes from multiple solar installers can actually help you find a solar investment with a shorter payback period than the national average. Data from the EnergySage Solar Marketplace shows that, in 2020, solar shoppers who compare their options in the Marketplace can achieve payback on their solar investment in about 8 years, before continuing to enjoy free electricity for the life of their solar panel systems, which can last between 25 and 35 years. 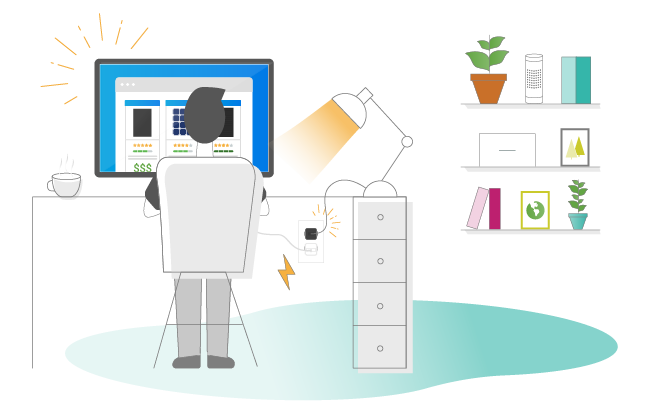 Get an instant estimate or register your property to see how quickly it pays off to invest in solar.