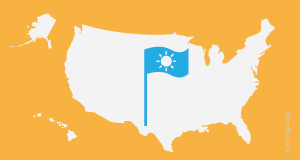 The sun is a near-infinite source of energy and one of the world’s greatest resources. One recent study found that 25,000 square miles of solar panels (an area roughly the size of West Virginia) would generate enough electricity to power the entire world. By investing in solar power, you can help take advantage of the sun’s abundant resources and bring the United States one step closer to energy independence.

Global energy markets are notoriously unstable, and price fluctuations can have a serious impact on the U.S. economy. When we expand our capacity to generate solar electricity within the U.S., we also insulate ourselves from those price fluctuations and ensure a sustainable source of energy for the future. Even Saudi Arabia, one of the world’s largest oil producers, recognizes the economic and political benefits of solar energy: in 2012, the country announced a goal to build 41 gigawatts of solar capacity by 2032.