Enrolling with a retail energy provider (REP) can be a straightforward process, but there are financial costs and benefits to keep in mind before switching providers from your regulated utility company.

There are two main options for REP contracts: fixed price and variable price. Depending on your individual needs and budget, one plan may be more advantageous than the other. 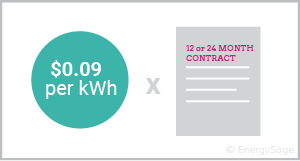 A fixed price plan specifies a price per kilowatt-hour (kWh) that will be the same each month for the duration of the contract. For example, an energy provider might charge 9.0 cents per kWh for electricity for the duration of your contract (usually 12 or 24 months). Importantly, a fixed rate plan does not mean you pay the same total amount each month - your monthly electric bill will rise and fall depending upon how much energy you use during each billing period. A fixed rate plan keeps the rate you pay - expressed in cents per kWh - consistent from month to month, but your ultimate monthly electricity bill is a result of multiplying that rate by your total energy consumption each month - expressed in kWh. 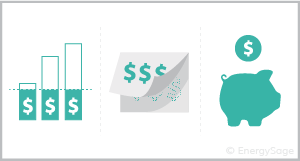 There are several advantages to enrolling in a fixed rate REP plan. First, if your utility’s electricity rates increase every six to twelve months, which has been the recent trend for electricity prices nationwide, then you can save money by locking in a rate for a longer time period with a REP.

Second, a fixed electricity rate makes it easy to forecast your energy costs for the duration of the contract because you’ll know the exact rate you will pay for electricity each month. By multiplying that rate by your expected monthly usage, which you can estimate using old utility bills, you can get a good idea of what your electric bill will look like from month to month. This is an important benefit for anyone with a fixed monthly income or looking to reduce risks in their financial portfolios.

A third benefit of fixed rate plans related to adding predictability to your energy bills is easier budgeting. By keeping track of your electricity usage and seasonal trends, it’s easy to estimate monthly electric bills and plan an overall budget around them. 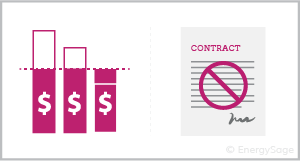 Of course, there are a couple of potential cons to a fixed rate REP plan. First, if the market price of electricity falls throughout the duration of your contract, you may be stuck paying a higher price than you would have if you continued to buy electricity from your existing utility.

Second, fixed rate plans usually have early cancelation fees. This is because the REP supplying your energy will typically buy the electricity needed to serve your contract upfront for the duration of your contract to get a better deal on the energy. It may still be possible to terminate a fixed rate REP contract, but it will often require paying a fee. This policy protects REPs from the repercussions of customers backing out early if the fixed rate plan isn’t working the way they want it to financially.

Is a fixed rate plan right for you?

Fixed rate plans can be a smart move for energy customers who fit some or all of the following characteristics:

For many consumers, fixed rate plans are a great option because of their predictability and simplicity. There’s no need to watch energy market prices and adjust your energy usage accordingly on a fixed rate plan - you’re going to pay the rate you signed up for no matter what. Additionally, the ability to budget and forecast energy spending on fixed rate plans makes them a logical option for anyone on a fixed income who wants to avoid being at the mercy of seasonal price swings, as may be the case in areas that experience variable weather patterns. This is because the demand for electricity increases during hot summer months and cold winter months (due to the increased use of air conditioning and heating systems), which then leads to higher prices for power.

A variable rate plan doesn’t give an exact per kWh rate; instead, the rate you pay for energy will fluctuate based on the wholesale price of electricity, which represents how much power plants charge energy providers to buy the electricity they produce. On a variable rate plan, the price of your energy can change by the hour, day, or month depending on your contract terms. 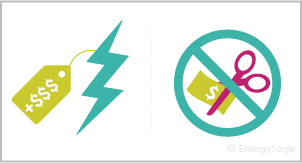 The most obvious advantage of variable rate REP plans is the ability to save money when energy prices fall. While a fixed rate contract won’t lead to additional savings when wholesale energy prices drop, a variable rate plan tracks those pricing changes and transfers the associated savings to the consumer.

Another advantage of variable rate plans is their lack of early termination fees or long-term contracts. Generally, variable rate plans are easier to opt out of than fixed rate plans, which means you can change providers or plans effectively whenever you want. Additionally, if you move before your contract period has expired, you won’t have to worry about being locked into a contract that isn’t available at your new home. 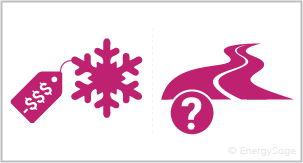 While variable rate plans can save you money when the market prices for energy fall, you’re also at the mercy of increased prices. Unlike a fixed rate plan, seasonal fluctuations in energy prices will directly impact the prices that consumers on variable rate plans pay. This can lead to surprisingly high energy prices in some instances, especially in the aftermath of any extreme weather events.

A second disadvantage of variable rate plans is the lack of predictability when it comes to energy costs. This can make monthly budgeting and forecasting much more difficult. While your monthly electricity bill in fixed rate plans is dependent solely on energy usage, a variable rate plan can lead to higher costs even if you reduce your usage, simply due to pricing changes on the energy market.

Is a variable rate plan right for you?

For someone who keeps a keen eye on the energy market and likes to shop around for different options, a variable rate plan could be a great option to save money on your electricity bill. Because there are usually no long-term contracts or early termination fees, it’s easy to switch to a fixed rate plan or different energy provider, given that you’re tracking the energy market and where prices are moving.