Geothermal energy: what you need to know

Renewable energy sources are found all around us – even beneath our feet. Deep within the earth, the temperature can be thousands of degrees above what we feel at the surface, and that energy can be harnessed and used in a number of different ways.

What is geothermal energy?

Geothermal energy comes from heat within the earth that comes from the original formation of the planet as well as the continuous radioactive decay of materials in rocks. This heat drives volcanoes to explode, tectonic plates to move, and even the Old Faithful geyser at Yellowstone National Park to erupt. Geothermal energy is a renewable source of energy because heat is constantly being produced deep within Earth.

There are several types of geothermal reservoirs below our feet, from high temperature to very low temperature, all with unique applications:

Middle temperature geothermal reservoirs can be used to generate steam to drive turbines, albeit with lower performance than high temperature reservoirs. These reservoirs are usually between 100°C and 150°C.

Geothermal reservoirs between 30°C and 100°C are classified as low temperature, and are often used for industrial processes and direct heating systems.

These reservoirs are found just about everywhere on Earth, and are used for small-scale geothermal heat pump systems.


How does geothermal energy work? How do we use it?

The basic principle of any geothermal energy system is that energy from within the earth in the form of heat can be captured and used at the surface. Several technologies have been developed that use the earth's heat for a variety of end cases. Most commonly, geothermal energy is used for heat or electrical generation at one of many possible scales.

There are three main ways we use geothermal energy:

Geothermal energy can also be used for electrical generation. Geothermal power plants use high-temperature water or steam from deep within the earth to spin turbines that generate electricity. These plants need to be built where high and middle geothermal reservoirs exist; in the United States, those reservoirs are most often found in Western states such as California, Nevada, Utah, and Arizona.

What are the different types of geothermal power plants? 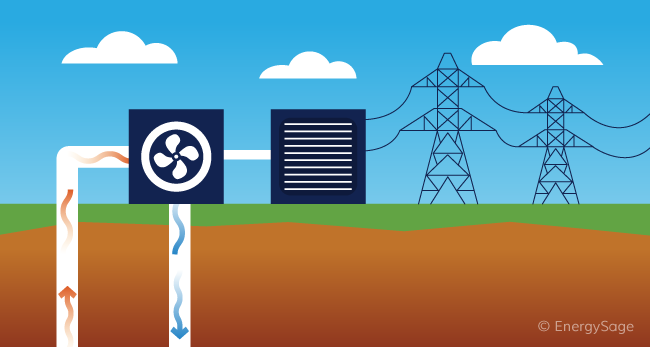 A dry steam geothermal power plant uses steam extracted from underground reservoirs via a production well to spin turbines. After spinning turbines and generating electricity, the steam condenses into water and is pumped back into the earth through an injection well. This type of geothermal plant is known as a “dry” steam power plant because the water that is extracted from within the earth is in gas form, and no liquid water comes directly out of the production well.

A flash steam geothermal plant doesn’t use steam directly from the earth to generate electricity. Rather, it pumps hot water at high pressure underground to the surface via its production well into a flash tank that is kept at a much lower pressure. Because of the flash tank’s low pressure, the hot, high-pressure rapidly turns to steam in the tank, known as “flashing”. This steam then is used to spin turbines and generate electricity. Like a dry steam plant, the steam condenses into water and is returned to the earth via an injection well once it is used to spin turbines.

A binary cycle geothermal power plant uses water at lower temperatures than flash steam plants, usually between 107 degrees C and 182 degrees C. Instead of using the water and steam directly, binary cycle plants use the heat from underground reservoirs to heat a second fluid with a low boiling point, known as a working fluid. When the working fluid vaporizes, it is used to spin a turbine and generate electricity.

Like dry steam and flash steam power plants, the water is returned to the earth via an injection well once it is used to heat the working fluid.