Hydropower: what you need to know 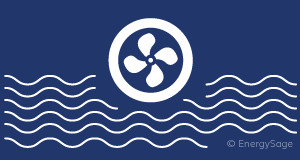 One of the oldest renewable energy sources is hydropower. More than 70 percent of the earth’s surface area is water, and there is a considerable amount of energy stored in that water that we can harness to generate electricity.

Hydropower is energy generated from water. It comes in many forms, from run-of-river to pumped storage to wave energy. Hydropower is one of the oldest renewable energy sources for generating electricity (known as hydroelectricity), and today remains the largest individual source of renewable electricity generation in the U.S.


How does hydropower work? 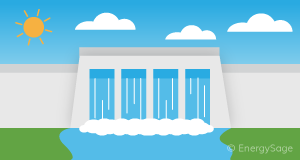 Regardless of the exact mechanism behind each individual hydropower source, the basic principle of hydropower is that we can use moving water to spin turbines and generate electricity.

The driving force behind most hydropower applications is the water cycle. Water evaporating from rivers, lakes, and oceans condenses in the atmosphere and returns to the surface of the earth as precipitation, which flows through streams and rivers. This moving water contains energy that can be harnessed to generate hydroelectricity by spinning turbines. A typical hydroelectric plant brings in flowing water through a pipe (known as a penstock) that funnels the water to turbines. This flowing water forces the turbines to spin a generator and produce usable electricity.

We can also harness hydropower from sources like the tides (tidal power) and ocean waves (wave energy). These sources don’t rely on the water cycle directly; rather, tidal power and wave energy come from the gravitational pull of the moon and wind blowing across the ocean’s surface, respectively.

The role of hydropower today

According to the Energy Information Administration (EIA), hydropower accounted for about seven percent of overall U.S. electricity generation in 2018. Hydroelectricity used to be the dominant renewable energy source for electricity in the country, but as technologies like wind and solar continue to grow in popularity, hydropower’s overall share of the electricity mix has decreased over time.

What are the different types of hydropower?

We harness the water’s potential energy in many ways:

Pumped storage hydropower plants are net consumers of electricity – this is because pumping water back up to a high elevation takes more energy than that same volume of water can generate flowing through turbines. However, pumped storage plants generate a net profit by selling electricity to the grid during times of peak usage when electricity is more expensive than usual. Water is pumped back to high elevations during off-peak times at a lower cost, making pumped storage systems valuable for the electric grid overall.

A run-of-river hydropower system also uses energy contained in flowing river water to generate electricity. However, unlike storage and pumped storage hydropower systems, run-of-river hydropower plants involve very little or no storage capacity. Oftentimes in a run-of-river system, water is diverted away from the main channel of a river through a turbine system and then returned to the main channel further downstream. These systems are not typically capable of generating electricity at the same scale as storage systems, but they often have a lower environmental impact than systems that involve damming rivers.

Other forces besides the water cycle allow us to capture energy from moving water. The earth’s oceans rise and fall in tidal cycles throughout the day due to the gravitational pull of the moon, and that movement is used to generate electricity. Tidal power systems come in several forms including tidal turbines and “barrages”, which are similar structures to dams. An important advantage of tidal power is its reliability: the tides are highly cyclical and can be predicted accurately. Currently, tidal power is an uncommon electricity source, and there are very few active installations around the world.

As wind blows across the surface of open water, energy is transferred to the water, forming waves containing energy. There are many technologies in development to harness wave energy, but like tidal power, wave energy is not a common electricity generation technology just yet.