Nuclear energy: what you need to know 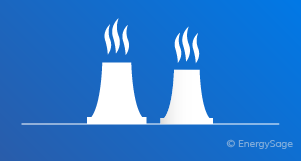 Nuclear energy is one of the most controversial - and promising - forms of clean energy available to us. There is an enormous amount of energy available from nuclear sources - just look at our sun for an example of how powerful nuclear energy can be. However, there are unique and difficult problems that come up with nuclear alone, such as how to deal with the waste left behind.

What is nuclear energy?

For the non-physicists out there, we’ll try to break down what nuclear power is at a basic level. All of the stuff in the world is made up of tiny particles - atoms - that are in turn made up of even tinier particles called protons, neutrons, and electrons. The protons and neutrons of an atom are clumped together tightly at its core, and this is known as an atom’s nucleus. There is a massive amount of energy present holding protons and neutrons together in the nucleus of an atom, and releasing that energy is what gives us nuclear power.

The key to nuclear energy: uranium

At the core (no pun intended) of most modern nuclear power plants is the element uranium. We won’t get into the nitty-gritty of its chemistry, but the basic points to know are that uranium can be found naturally in most rocks, and nuclear power plants use a specific type of uranium (U-235) for fuel because it is easily split apart in a fission reaction. More on that below.

Technically speaking, uranium is considered a non-renewable resource, even though it is common in rocks worldwide.

How is nuclear energy produced? How does a nuclear reactor work?

Nuclear energy is produced when energy held in an atom’s nucleus is released. There are a few ways to do this, but the way nuclear reactors do this is through a process called nuclear fission. Below, we’ll outline the three major steps involved in creating and harnessing nuclear energy:

Nuclear power plants generate nuclear power by capturing energy from a controlled nuclear chain reaction. This chain reaction is usually started by a neutron fired at the fuel in the reactor (usually uranium). When a neutron hits a uranium atom, the uranium splits into two smaller atoms, which releases energy (in the form of heat) as well as a few extra neutrons. These extra neutrons then collide with other uranium atoms, and the process repeats (this is why we call it a chain reaction). Here’s a handy gif from the Nuclear Energy Institute showing how a nuclear chain reaction keeps moving:

Remember how we said that every time a uranium atom is split by an incoming neutron, it releases heat? That heat is the way we generate electrical power from a nuclear chain reaction.

In a nuclear reactor, the uranium fuel is surrounded by water. As the fission chain reaction goes on and more heat is released, that heat warms the surrounding water to the point where it boils and becomes steam

In practice, only some nuclear reactors boil the water directly around it into steam. This kind of reactor is known as a boiling water reactor. The second type of common nuclear generator is known as a pressurized water reactor. In these models, water surrounding the nuclear fuel core is kept under high pressure. When heated, it is transported with pipes to a separate water supply that it heats, boiling it into steam.

Step 3: Use the steam to spin a turbine and generate power

At the end of the day, nuclear power plants generate electricity just like traditional coal, gas-fired, or geothermal power plants do: by using steam to spin a turbine. The main difference? The steam in a nuclear plant comes from water heated by nuclear fission instead of by burning coal or oil (or by the interior of the earth, in the case of geothermal).

The role of nuclear energy today

Nuclear power has had a convoluted and controversial history, even though it has supplied about 20 percent of all electricity generation in the U.S. since 1990. Currently, 29 states have at least one nuclear reactor, and there are 96 operating nuclear reactors in the country as a whole. As of late 2020, two new reactor units are currently under construction in Georgia.