Much like hydropower, the environmental impact of nuclear energy is more complicated than other clean or renewable energy sources. This mostly comes down to the issue of radioactive waste, a unique problem for nuclear energy generation. When managed correctly, nuclear power plants are capable of being more environmentally-friendly than other traditional energy generation options.

Nuclear energy is a (mostly) clean, (sort of) renewable source of electricity

Although nuclear is technically not renewable (due to the finite amount of uranium available on Earth), it’s still widely available. And although generating electricity with nuclear energy is a carbon-free process, constructing new nuclear energy plants and mining the uranium fuel has its own environmental impact.

One way to compare the environmental impact of various electrical generation technologies is to analyze their life-cycle greenhouse gas emissions, which is the total amount of greenhouse gas output (measured in grams carbon dioxide equivalent, or gCO2eq) that can be expected from deploying a generator. Life-cycle analyses take into account the full life of the system, from obtaining materials through the construction process, to operation, to end of life waste management.

The Intergovernmental Panel on Climate Change, or IPCC, released a report in 2014 covering the mitigation of climate change. Their chapter on energy systems examines, among other things, lifecycle emissions of various types of electricity generation plants including both renewables and fossil fuels. The IPCC measures gCO2eq emissions per kilowatt-hour (kWh) of electricity produced from these various types of power plants.

*Hydropower has several environmental consequences that are still being studied, and the actual lifecycle emissions for a hydropower plant have the potential to be significantly higher than 24 gCO2eq/kWh. 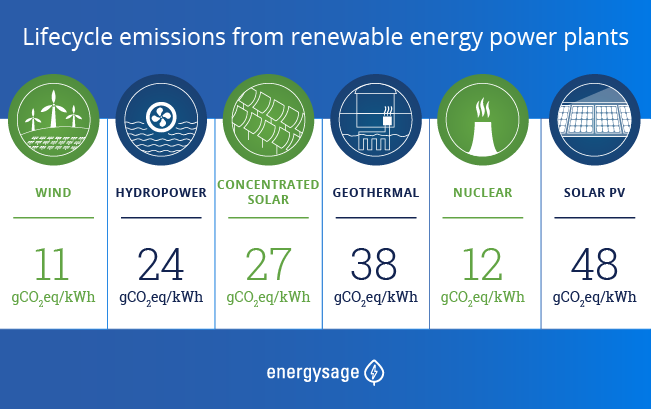 The most pressing environmental issue when it comes to nuclear power is the waste it produces. There are a few types of radioactive material produced throughout the lifecycle of a nuclear power plant, most notably uranium mill tailings and used reactor fuel. If these aren’t handled and disposed of carefully, they pose many human and environmental health consequences. The U.S. has an entire regulatory commission set up to regulate and oversee the safe operation of nuclear power plants. The U.S. Nuclear Regulatory Commission (NRC) design regulations governing the handling, transportation, storage, and disposal of nuclear materials.

In order to safely dispose of spent nuclear fuel (the most dangerous type of nuclear material that comes from operating a nuclear power plant), nuclear plant operators and governments store the spent fuel in either a wet or dry storage container to prevent radiation from escaping. One example of this type of disposal is a dry storage cask, which is essentially a concrete and steel barrel sealed tightly around the waste.