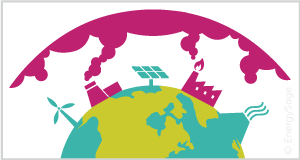 In everyday life, people and businesses do a number of actions that result in the emission of greenhouse gases (GHGs). When greenhouse gases are produced and released into the atmosphere, they trap heat and contribute to the trend of climate change. These gases stay in the atmosphere for a long time (anywhere from a few years to thousands depending on the gas in question). Fortunately, you can purchase carbon offsets as a way to mitigate your personal greenhouse gas emissions.

What are carbon offsets?

Unfortunately, it’s near impossible to have a zero or negative “carbon footprint.” Your carbon footprint is a representation of the total greenhouse gas emissions that were generated from your actions (or those of a business or organization, population, or event). This number is represented as pounds of carbon dioxide equivalent (CO2e). Your commute to work, the food you eat and clothing you wear (and how they are produced), the act of powering up your TV or heating your home in the winter – all of these direct and indirect actions produce GHG emissions, contributing to climate change over time.

In the name of environmental and social responsibility, many organizations offer the option for individuals, companies and organizations to purchase carbon offsets as a way to shrink their carbon footprint.

One carbon offset represents 1,000 tonnes (or 2,205 pounds) of CO2 offset, or the equivalent amount of another greenhouse gas that would have the same environmental impact as 1,000 tonnes of CO2.

How can you calculate your carbon footprint?

There are many sources online that you can use to get a rough estimate of your carbon footprint. They will ask questions about the number of people in your household, primary heating source, methods of transportation, and more. A good place to start is the EPA’s Carbon Footprint calculator, which will calculate your approximate carbon footprint and also suggest ways to reduce your overall emissions throughout the process. 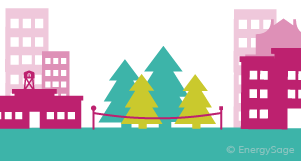 One of the most common types of projects supports the expansion of renewable energy. Supporting renewable energy decreases reliance on fossil fuels like oil and coal, both major contributors to greenhouse gas emissions in modern society. Renewable energy projects could include a variety of options, from building utility-scale solar farms, producing wind energy via fields of wind turbines, or building a hydroelectric plant.

Another frequent use of carbon offsets is for land-use projects. Trees capture and sequester carbon dioxide to take it out of the atmosphere, and as a result, deforestation contributes to increased greenhouse gas emissions. To combat this, many carbon offset projects take on the task of preserving forests or planting trees to build up new forests that sequester carbon.

Carbon offsets sometimes support projects to capture methane gas at a landfill. Methane gas is a particularly powerful carbon emission – one methane gas molecule is 25 times more powerful than one molecule of carbon dioxide. Methane gas capture projects at landfills are designed to use the methane that is produced by decomposing waste for energy, rather than simply sending it into the atmosphere.

Energy efficiency is another common form of a carbon offset project. Like renewable energy projects, these carbon offsets look to combat overall emissions by decreasing the use of “dirty energy” produced by fossil fuels. These investments go towards building energy efficient, LEED certified buildings, replacing combustion devices with more efficient ones to decrease the amount of fuel required for power, and more.

While the scope of offset projects is broad in many ways, organizations and companies offering the purchase of carbon offsets often allow you some choice in the type of project you’re investing in as they have multiple projects going on simultaneously.

Carbon offsets vs. renewable energy certificates: how are they different? 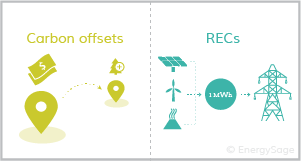 Carbon offsets are also known as voluntary emissions reductions (VERs) or carbon reduction tons (CRTs). The market for carbon offsets is distinct from the renewable energy certificate (REC) market. While both are a form of sustainable trade, can reduce your carbon footprint, and are often used interchangeably, there’s a clear distinction between the two.

RECs are directly related to electricity production, not greenhouse gas emissions. For every 1,000 kWh of energy produced by a renewable energy source (like wind turbines or solar panels) that is connected to the grid, one REC is also generated.

The overall generation of renewable energy (and by extension RECs) decreases the need for other sources of electricity like coal, which emits carbon dioxide into the atmosphere when combusted. While more RECs overall lead to fewer greenhouse gases in the atmosphere, they aren’t directly connected to combatting emissions produced by your actions or habits elsewhere like a carbon offset is. (Learn more about RECs with EnergySage’s guide to renewable energy certificates.)