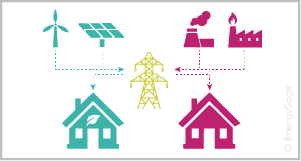 Electricity enters the grid from many different sources, ranging from wind power and solar to natural gas and nuclear power. Because of this, there is no way to know exactly what energy source your electricity comes from. To solve this problem, you can purchase RECs along with your electricity. RECs are certificates that transfer the “renewable” aspects of renewable energy to the owner. In other words, renewable energy credits, paired with electricity from the grid, are renewable energy that is being generated on your behalf.


How RECs are generated 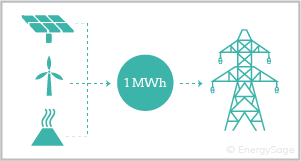 A REC is produced when a renewable energy source generates one megawatt-hour (MWh) of electricity and delivers it to the grid. For example, if a wind power facility produces 5 MWh of electricity, they have 5 credits to either keep or sell. If you or your business buys those credits, you are buying the “renewable” aspect of the electricity from the wind farm, and you can say that 5 MWh of your electricity use came from a renewable source.

A REC that has been sold once cannot be purchased again. All renewable energy credits are uniquely numbered and generally include information such as where they were generated, the type of renewable resource they came from, and a date stamp of generation. The exchange of RECs is tracked and recorded.

RECs give you certified proof that you are using renewable energy from the grid without having to install solar panels or other renewable energy systems at your home or business. This gives you flexibility, especially if your business is based in multiple places or does not have the infrastructure to install solar panels. With RECs, your business can reduce its carbon footprint.

Purchasing RECs also supports the renewable energy market by providing a demand signal to the market, which in turns encourages more supply of renewable energy. In this way, RECs not only RECs help businesses meet their greenhouse gas emission goals – they also encourage the generation of more renewable energy.

RECs are a good fit for you if you:

RECs encourage the production of renewable energy, which is any energy source that produces no fossil fuel-based greenhouse gas emissions or other pollutants. This makes renewable electricity cleaner and better for the environment than burning natural gas or coal.

RECs can be generated from the following renewable energy sources: wind, solar, moving water (hydropower), organic plant and waste material (biomass), and the earth’s heat (geothermal). Unlike coal or natural gas, renewable energy supplied by these sources is readily available and constantly replenishes.

The difference between RECs and SRECs 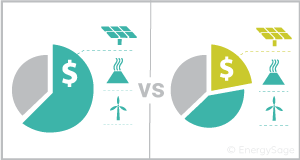 Homeowners and commercial businesses earn one SREC for every one megawatt-hour (MWh) of electricity generated. They can then sell these SRECs to electrical utilities. An SREC can be worth $300 or more in certain markets and, for a typical 5 kW home solar installation, you could earn six SRECs in a year.

Voluntary credit buyers are typically environmentally conscious organizations focused on reducing their greenhouse gas emissions. These organizations can have many motivations for purchasing renewable energy credits. They might have emissions goals they are trying to reach as a company, or might want to know where their electricity is coming from. Examples of voluntary REC buyers include Whole Foods and Starbucks. Homeowners can also be voluntary buyers, meaning anyone can support renewable energy at an individual level.

Compliance buyers are electrical utilities that are obligated to have a certain percent of their electricity generation come from renewable resources. Some states have regulations called Renewable Portfolio Standards (RPS) that set requirements for renewable energy use. These laws mean that a utility has to provide renewable credits as proof that they are sourcing a set amount of their electricity from renewable resources. The utility can generate the RECs themselves with renewable energy sources, but if they do not generate enough they have to purchase them.