Renewable energy certificates (RECs) give companies, institutions, and individuals a simple way to offset their carbon footprint and support clean energy. Purchasing RECs is equivalent to purchasing renewable energy; if your company buys RECs then you can claim that the energy you use comes from renewable sources.

Because energy enters the grid from many sources—from nuclear power to coal to solar power—there is no way to know exactly where your electricity is coming from. Renewable energy certificates provide a solution. RECs always come from renewable energy, so buying them allows you to claim the renewable energy attributes of that electricity.

What is renewable energy? 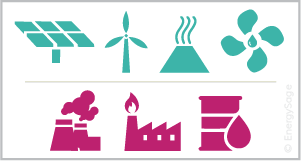 Electricity generated from renewable resources is “renewable energy.” Renewable sources include: wind, solar, moving water (hydropower), organic plant and waste material (biomass), and the earth’s heat (geothermal). These sources of power are “renewable” because they are constantly replenished—there is no shortage of sunlight or wind, for example.

In contrast, fossil fuels such as oil and gas are finite, meaning there is a limited supply. They will run out once we have used them all. Fossil fuels also cause pollution, contributing to climate change. In fact, fossil fuels make up three fourths of human-caused emissions over the past 20 years. RECs provide companies and individuals a way to choose renewable energy over fossil fuels.

The pros of buying RECs

Buying RECs has many pros for individuals and companies. Some of these benefits include

Being able to choose exactly where you buy renewable energy from—locally or anywhere else in the U.S.

Any business or individual can buy RECs from anywhere in the U.S., choosing amongst different locations and pricing options. They provide a simple way to support renewable energy generation and offset your carbon emissions. RECs can benefit your business as well, helping you achieve emissions goals and helping promote your commitment to renewables.

Buying RECs also supports the renewable energy market, which encourages renewable electricity on a broader scale. The more RECs are in demand, the more renewable energy must be generated. This weakens the demand for fossil fuel, encouraging a healthier planet. 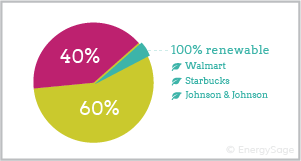 Businesses are increasingly trying to become more socially responsible by taking action against climate change. RECs provide a simple and effective way to support renewable energy generation without having to invest in large energy generation projects, like wind farms or solar panels.

Sixty percent of Fortune 100 companies have set greenhouse gas emission goals. Companies including Walmart, Starbucks, and Johnson & Johnson have all pledged to obtain 100 percent of their electricity from renewable resources. These companies are sensing a shift in public concern over pollution and carbon emissions. Using renewable energy contributes to a positive brand image and builds relationships with the community, employees, and other stakeholders.

While there are many benefits to buying RECs, there are also some things to be aware of.

Where do your RECs come from?

You also may want to consider whether or not to buy bundled RECs. A REC always represents 1 MWh of renewable electricity. Some RECs have greater potential than others to drive development of renewable energy projects. Less expensive RECs are typically “unbundled,” meaning they are sold separately from the original electricity production that they represent. In contrast, bundled RECs are tied to the purchase of electricity. These must come from your regional grid.

Unbundled RECs can come from an oversupplied market—an out-of-state solar farm in California, for example. They will be cheaper because the renewable energy market there is oversupplied. If, on the other hand, you choose to buy bundled RECs from your regional grid, you can drive development of new solar projects, particularly in states where there is less renewable energy generation.

In short, you can claim to use renewable energy no matter where your RECs come from. If your primary motivation is to promote the renewable energy industry in your area, buying bundled RECs will typically do more.