How much do solar panels cost? 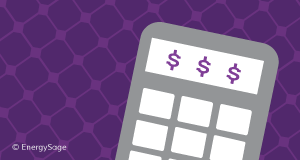 Solar panel systems qualify for a number of rebates, tax credits and incentives. These incentives can reduce the cost of your system by 26 percent or more, depending on where you live.

Calculating the cost of a solar panel system

In this example, your net solar panel installation cost is nearly 39 percent less than the gross cost, thanks to cash rebates, state tax credits, and the federal ITC. Remember that net costs can vary significantly depending on what incentives are available in your area. We recommend using EnergySage’s Solar Calculator to get a quick estimate of how much you can save by going solar in your area.

Benefits of a solar panel system

Free electricity for 25 to 35 years

In the example above, if you continued buying electricity from your utility, you would have paid them more than $1,200 a year, which amounts to more than $25,000 over 20 years. By going solar, your electricity costs will become near $0 for the next 20 years, and your actual savings will increase each year since you will avoid utility rate hikes.

If you live in a state with a market for SRECs, you may be able to generate additional income by selling the SRECs generated by your solar panel system. States with SREC markets have a legal mandate to get a certain percentage of their electricity from solar power, and utilities will buy your SRECs in order to fulfill the mandate.

Numerous studies reveal that properties equipped with solar power systems sell faster than average, and tend to sell at a premium too – oftentimes this premium more than pays back the initial costs of the system. Lawrence Berkeley National Laboratory’s 2015 report, Appraising into the Sun: Six-State Solar Home Paired-Sales Analysis, found that solar PV systems added a value of $3.78/Watt, on average, to home sale prices. That’s the equivalent of adding $22,680 for a standard 6kW system – significantly more than the system’s net cost.