›
‹
Electricity
The electrical grid How do we pay for electricity? The future of electricity
Learn About Solar

Electricity  |  How do we pay for electricity?

How do we pay for electricity? 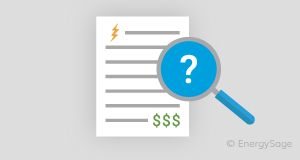 One of the most important things to understand about electricity is how we pay for the ongoing operation of the grid. It costs money both to produce electricity and to transmit it to end users. The amount you pay on your electricity bill every month is a combination of these charges.

How does electricity pricing work?

For most homeowners, electricity is priced on a per kilowatt-hour (kWh) basis. This means that your monthly electricity bill is calculated by multiplying the amount of electricity you used in a month by your electricity rate.

The electricity rate you are on differs by the region you live in, as well as the utility you purchase power from. Utilities establish the price of electricity to recover all of their costs, and often are required by law to revise their rates slightly every six months to a year. The price of electricity can change due to variations from the forecasted demand for electricity, changes in fuel prices, or to account for new investments by your utility in the transmission and distribution system or new sources of power generation.


What are you paying for on your electric bill?

Over time, the cost of electricity has increased steadily, as utilities built more and more power plants and a wider interconnected web of transmission lines to meet the increasing needs of a growing economy and population. In fact, according to the US Energy Information Administration (EIA), the price of electricity has increased steadily by about 1.3% per year over the previous 10 years. If these trends continue, that means that if you currently pay $100 per month for electricity, 25 years from now you’ll pay $136 every month for electricity.

When you pay your electricity bill, the money you spend goes towards two primary things: first, paying for generating the actual electricity that you used (i.e., burning coal at a power plant to produce power) and, second, maintaining the grid (i.e., fixing or replacing any aging transmission infrastructure).

In other words, your monthly electricity bill is paying directly for purchasing any fuel that your utility burns, for the annualized cost of building the power plant, and maintaining the network of poles and wires that move electricity from region to region as well as within your own neighborhood.

What are the components of your electricity bill?

The price at which each power plant runs is determined by its fuel cost: i.e., how much does it cost to purchase the fuel it uses to produce electricity (such as coal or oil). For the most part, nuclear power plants have the lowest fuel costs, while the cost of producing electricity with coal and natural gas is higher, with natural gas somewhat less expensive than coal these days.

Notably, renewable energy resources such as solar and wind have no fuel costs and produce energy for little to no ongoing cost, making these resources consistently the cheapest available and helping to decrease the cost of electricity for the grid as a whole.

The transmission and distribution charge, alternatively referred to as the delivery charge or the poles and wires charge, covers exactly that: it pays for building and maintaining the telephone poles and electrical wires that move electricity from power plants to your property. You can think of the delivery charge as effectively the same as paying for shipping and handling on any product you buy online.

Transmission and distribution lines are similar to water or gas pipelines: they have a capacity limit for how much electricity they can carry at once, determined by the voltage of the individual lines. Similar to how more water and gas pipelines have been built over time to accommodate the greater need for natural gas or water in budding population centers, so too have additional transmission and distribution lines been built over time to accommodate an increasing need for electricity.

Additionally, many utilities are now implementing additional, fixed monthly fees, such as a customer charge, which is a monthly payment for using the utility’s hardware–your electricity meter–to connect to the utility’s network, the same way a cable or internet company might charge you monthly for a cable box or modem that they provide you. Alternatively, your utility may now include a demand charge, which is a charge associated with the maximum amount of electricity you use in a given month.

How to read your electricity bill

Reading–and understanding–your electricity bill can be difficult. In fact, half of Americans don’t know what electricity rate they’re on. But with a few simple tricks for reading your electricity bill, it’s easy to determine what rate you’re on, what’s included in your monthly electric bill, and how to calculate what your bill is each month.

It may seem intimidating at first, but knowing how to read your electricity bill can have major benefits, as knowing what you spend your money gives you the knowledge to figure out how to cut your monthly bills.