The difference between RECs and solar 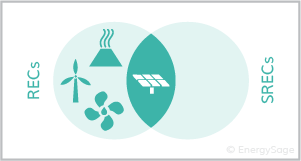 Like standard RECs, solar renewable energy certificates (SRECs) represent the “renewable” part of renewable electricity. However, SRECs only apply to electricity that comes from solar panels.


SRECs and your solar panels

If you install solar panels on your roof, you will generate renewable electricity on-site. You will also generate one SREC for every megawatt hour (MWh) of electricity. Like other RECs, your SRECs can be sold to utilities or other organizations who want to use renewable solar energy.

You may or may not own the rights to your SRECs. If you have installed your solar panels with a solar lease or power purchase agreement (PPA), the company that owns the system also owns the SRECs.

Should you choose rooftop solar or RECs? 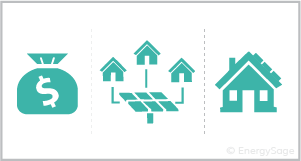 If you want to support renewable energy, you have many different options, including buying RECs, subscribing to community solar or a green power program, or installing solar at your home or business.

The cost of installing solar doesn’t have to be a barrier to you – there are plenty of $0-down solar financing options available to you, and the average EnergySage shopper breaks even on their solar investment in just seven years. If you live in a state with an SREC market, you can sell your SRECs to improve the economics of going solar even more.

What happens to SRECs generated by solar panels?

Solar system owners can sell their SRECs to power companies for anywhere from a few dollars to hundreds of dollars each. Understanding why this happens requires an understanding of a policy known as the Renewable Portfolio Standard (RPS). 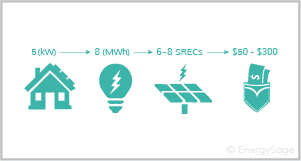 If you own the SRECs produced by your solar panels, and you live in a state with a solar carve-out policy, you may be able to sell them for a profit. Here’s an example: A typical home may have a 5 kilowatt (kW) solar panel system. That system would produce approximately six to eight Megawatt-hours (MWh) of electricity every year, and six to eight associated SRECs. SRECs are worth different amounts depending what state they are generated and sold in, but they can range from less than $50 to more than $300 per SREC.

States have alternative compliance payments (ACP), which also affect prices. The ACP is the fine an electrical provider must pay per MWh if they don’t meet their obligations under the RPS, and each state sets its own ACP. SRECs won’t typically sell for more than the ACP, because utilities can choose to pay the fine instead.

Depending on the cost of SRECs, a 5 kW solar panel system can make an extra $250-$1,500 per year, on top of savings the homeowner was already getting from switching to solar. Of course this is only true if you own the SRECs associated with the electricity you generate, which is something to be aware of during the process of going solar. Additionally, some states do not have active SREC markets, and the value of SRECs varies year to year.