How do electric car batteries work? 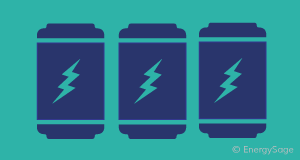 The energy storage system in electric cars comes in the form of a battery. Battery type can vary depending on if the vehicle is all-electric (AEV) or plug-in hybrid electric (PHEV). Current battery technology is designed for extended life (typically about 8 years or 100,000 miles). Some batteries and can last for 12 to 15 years in moderate climates, or eight to 12 years in extreme climates. There are four main kinds of batteries used in electric cars: lithium-ion, nickel-metal hydride, lead-acid, and ultracapacitors.

The most common type of battery used in electric cars is the lithium-ion battery. This kind of battery may sound familiar – these batteries are also used in most portable electronics, including cell phones and computers. Lithium-ion batteries have a high power-to-weight ratio, high energy efficiency and good high-temperature performance. In practice, this means that the batteries hold a lot of energy for their weight, which is vital for electric cars – less weight means the car can travel further on a single charge. Lithium-ion batteries also have a low “self-discharge” rate, which means that they are better than other batteries at maintaining the ability to hold a full charge over time.

Additionally, most lithium-ion battery parts are recyclable making these batteries a good choice for the environmentally conscious. This battery is used in both AEVs and PHEVs, though the exact chemistry of these batteries varies from those found in consumer electronics.

Nickel-metal hydride batteries have a longer life-cycle than lithium-ion or lead-acid batteries. They are also safe and tolerant to abuse. The biggest issues with nickel-metal hydride batteries is their high cost, high self-discharge rate, and the fact that they generate significant heat at high temperatures. These issues make these batteries less effective for rechargeable electric vehicles, which is why they are primarily used in hybrid electric vehicles. 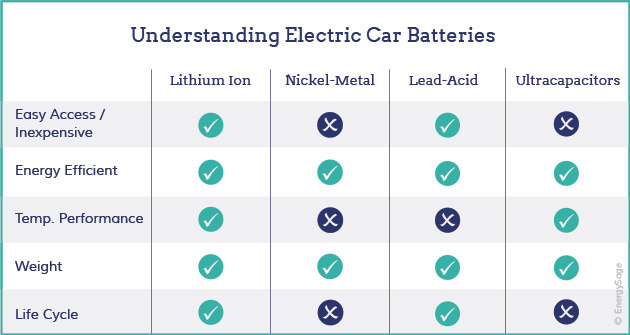 How do electric car batteries work?

All-electric vehicles have an electric traction motor in place of the internal combustion engine used in gasoline-powered cars. AEVs use a traction battery pack (usually a lithium-ion battery) to store the electricity used by the motor to drive the vehicle's wheels. The traction battery pack is the part of the car that must be plugged in and recharged, and its efficiency helps determine the overall range of the vehicle.

For both AEVs and PHEVs, the battery is typically charged through a standard connector and receptacle that works with any Level 1 (120 V AC) or Level 2 (240 V for residential/208 V for commercial) plug. Some rapid charging stations use different receptors (known as SAE receptors or CHAdeMO) which are not standardized. The type of vehicle you purchase will determine the charging station you can use.

Charging your vehicle with electricity presents you with the opportunity to cut your greenhouse gas emissions by fueling your vehicle with a renewable resource like solar power. On average 80 percent of electric car charging is done at home, and solar panels can both offset the costs of charging a vehicle regularly and reduce the use of nonrenewable fuels in the recharging process. Additionally, many public chargers use solar panels as a way to reduce the use of nonrenewable energy throughout the process. If you’re interested in a solar panel installation plus installing a EV charging station at home, simply join the EnergySage Marketplace today and mention your interest in EV charging when filling out your profile questions.

Going off the grid with solar batteries