How much can you save with solar batteries? 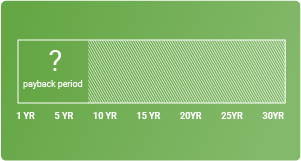 At present, most people don’t purchase storage as a financial investment: the primary benefit of energy storage for home and business owners is resiliency, or emergency backup power to keep the lights on in the event of an outage. For these home and business owners, the financial benefit comes from avoiding outages in their homes and down time at their businesses, and it’s hard to put a value on that sort of resiliency and peace of mind.

Nevertheless, batteries will still almost certainly save you additional money beyond what you can save with solar alone and should pay for themselves over their lifetime.

What storage incentives are available to you?

The first thing to know is whether there are any storage incentives available to you. As is the case with solar, the best incentive for energy storage is the federal investment tax credit (ITC), which currently provides a 26 percent credit on your taxes for the cost of your battery. Importantly, to be eligible to receive the ITC a battery must be charged by a renewable resource (like solar). In other words, if you buy a standalone battery and charge from the grid, it won’t be eligible for the ITC.

Outside of the federal ITC, a number of states now have battery incentives as well. From the SGIP program in California to the ConnectedSolutions program in northeastern states, these incentives could save you thousands of dollars on the cost of a battery, helping to reduce the payback period for your investment.

Do you have one-to-one net metering?

In most places in the US, if you have solar, you’ll be placed onto a net metering rate plan. However, not all states or utilities offer one-to-one net metering, meaning that your utility will charge you more for each unit of electricity that you pull from the grid than they’ll compensate you for each unit of solar energy that you put back onto the grid. In these scenarios, or if you don’t have net metering policies available to you at all, installing solar may not make financial sense, given that net metering is the foundational policy that lets people save with solar. In places like this, adding a battery to your solar installation is the best way to unlock the true benefit of your solar panels: instead of exporting excess electricity onto the grid for less than it costs to purchase electricity back, you can store your excess electricity in your battery, saving money on your electricity bills in the process.

Are you on a time-varying rate?

Another important consideration when determining how much energy storage can save you is the question of what type of utility rate you are on. In some parts of the country, including California, homes and businesses are on time-of-use (TOU) rates. TOU rates are so-called because the price you pay for electricity varies based on the time of day; typically, electricity used over night is much less expensive than electricity used in the evening, the peak period on the grid. (Note: while TOU rates are the most common form of these types of rates, there are other utility rate plans where the price varies based on the time of day, or the season of the year, all of which are broadly called “time-varying rates.”)

Often, if you’re on a TOU rate, the value of electricity during the day (i.e., when your solar panels are producing) will be lower than the value of electricity in the evening (i.e., when you’re pulling from the grid after the sun has gone down). In that scenario, you might not be able to offset as much of your electricity bill because your solar isn’t avoiding electricity consumption when the prices are highest. However, when you pair a battery with a solar panel installation, you can charge your battery during the day instead of exporting your solar power to the grid for a reduced rate, and then pull from your battery during the three- or four-hour peak window after the sun goes down, thus avoiding the highest rates during the day.

Do you have demand charges?

While uncommon on residential electricity rates, demand charges are regularly a part of utility rates for commercial and industrial users throughout the country. The way demand charges work is that your utility determines the hour (or fifteen-minute, or even five-minute interval) in which you had the highest demand for electricity from the grid, and then charges you for the whole month based on that single moment in time. Batteries are a very effective way to mitigate demand charges and can help significantly reduce electricity bills when properly sized to your usage profile.

Bonus benefits: provide (and get paid for) grid services

Increasingly, companies are using batteries to provide grid services, aggregating the stored capacity from hundreds or thousands of home energy storage systems in a given region to make a big impact on the grid. Historically, grid services, a sort of nebulous term that encompasses a lot of the different technical requirements to keep the electrical grid operational, have always been provided by traditional resources owned and operated by large companies. But with the flexibility and power of energy storage systems now distributed throughout the country, individual home and business owners can use their batteries to benefit the grid and, sometimes, be a part of a program that compensates you for that.

The bottom line: how much can you expect to save with a battery?

At the end of the day, the answer to how much you can expect to save with a battery is, “it depends!” (Sorry, we know that’s not a particularly satisfying answer.) The longer answer is that if you live somewhere with a battery incentive, and where a battery helps you avoid high electricity rates, your payback could be as short as five years. If that doesn’t quite sound like your personal situation, then you may be looking at a situation where the battery doesn’t provide enough savings to make sense exclusively from a financial standpoint. In that case, the most important question you have to ask yourself is how much would you pay to avoid an outage– that then becomes the true financial value of having storage.

EnergySage is the nation's online marketplace for solar and storage: when you sign up for a free account, we connect you with companies in your area, who compete for your business with custom solar-plus-storage quotes tailored to fit your needs. Over 10 million people come to EnergySage each year to learn about, shop for and invest in solar and home batteries. Sign up today to see how much you can save.