One of the many reasons to consider storage when going solar is the level of energy resiliency you can achieve from a solar plus storage system. When the electric grid goes down due to technical errors or extreme weather events, solar panels plus energy storage provide resiliency by ensuring you have electricity at your property even when the grid can’t provide power, and provide a compelling alternative to traditional gas-powered home generation.

What happens to solar panels during a grid failure? 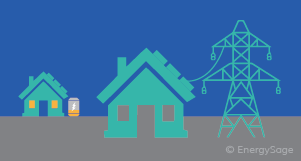 If the electrical grid goes down, being prepared with backup power is essential, especially if the power outage has been caused by some natural disaster that will continue to impact the electrical grid for a prolonged period of time. Installing solar panels on your property is a great way to ensure you won’t lose power, but only if you also have a battery installed to store energy produced by your solar panels.

Standard grid-tied solar panel systems don’t work during a power outage for two reasons. First, solar panels are constantly producing variable amounts of electricity due to varying sunlight conditions and positions. For this reason, your solar panels produce quantities of power that don’t depend on the amount of energy your home needs at that instant. As a result, if put into your home during a power outage, this electricity might lead your lights to blink and possibly cause damage to your electrical devices.

The second reason grid-tied solar is inaccessible during a power outage is for safety. During a power outage, your electrical utility will send out repair crews to locate and repair the point(s) where the grid failed. If a solar array is sending power to the grid during an outage, those workers are at risk of being electrocuted by stray energy, thus solar systems automatically shut down when the grid is down. 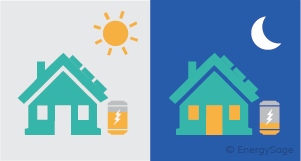 Although solar panels don’t normally work when the grid is down, there are ways to continue producing power off the grid. Pairing your solar panel array with battery storage is an effective resiliency measure that can provide you with backup power and off-grid generation when the electrical grid isn’t operational. This type of setup is often called a hybrid solar system as it can both utilize the electric grid and its own microgrid structure with the addition of a solar battery.

There are multiple benefits of a hybrid solar system. For instance, having a battery hooked up to your solar array allows you to store excess energy produced by the system for use when the sun isn’t shining on your panels. A solar battery works in a similar way to a normal battery you might put in a TV remote or a flashlight: both store energy for use at a later time. In the case of solar batteries, however, this means you can store the sun’s energy when you’re away from home during the day and then use that energy later at night after the sun has set.

Most importantly for building a resilient home, having a hybrid solar system with a battery provides backup power to your home when the electrical grid fails. By having your solar panels charge a battery over time, you will produce accessible power that is even available when the power goes out. This means that home systems–such as climate control, medical devices, lighting, and communication devices–can continue to work for an extended period of time in an emergency.

Home batteries do have a limited capacity, and many only store enough energy to run basic home systems for a brief period of time. Although grid-tied solar panels turn off for practical and safety reasons during a grid blackout, having a hybrid system can, in some cases, allow you to continue producing power to run your home. Many solar energy systems with batteries will have either a physical switch or software setting that allows your panels continue to operate independent of the larger grid, thus recharging your home battery when the sun is shining.

Is a hybrid solar plus storage system right for you? 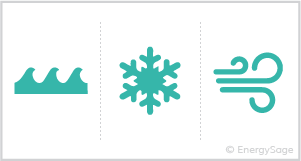 If you experience power outages or live in an area where weather-related damages to the electric grid are common, making sure you have reliable power when the electric grid is down or damaged can be potentially life-saving. High winds, flooding and heavy rain, and snow storms are some of many weather events that do damage to power lines and other parts of the electrical grid and being equipped to self-generate and find power from places other than the grid is essential.