Pros and cons of electric cars 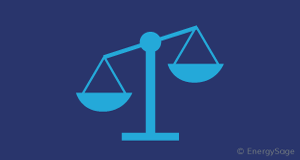 Electric cars are growing in popularity every day. Just like conventional cars, there are certain benefits and drawbacks of using an electric car. Here are the top few to keep in mind:

On the pros side, electric cars are energy efficient, are net good for the environment, and don't require as much maintenance as traditional gas-powered cars. On the cons side, you can't travel as far between refueling, the actual refueling process takes longer than filling a car at a gas pump, and upfront costs are sometimes a barrier.

Below, we'll explore these pros and cons in further detail.

Energy efficiency refers to the amount of energy from the fuel source that is converted into actual energy for powering the wheels of a vehicle. AEVs are far more efficient than conventional gas-powered vehicles: AEV batteries convert 59 to 62 percent of energy into vehicle movement while gas powered vehicles only convert between 17 and 21 percent. This means that charging an AEV’s battery puts more towards actually powering the vehicle than filling up at a gas pump.

Emission reduction, including reduced usage of fuel, is another pro for all-electric vehicles. Because they rely on a rechargeable battery, driving an electric car does not create any tailpipe emissions which are a major source of pollution in the United States. In addition, the rechargeable battery means much less money spent on fuel, which means all energy can be sourced domestically (and often through renewable resources such as solar panel systems).

Improving battery technology in today's light-duty AEVs means they can drive 100 miles while consuming only 25 to 40 kilowatt-hours (kWh)  of electricity. Assuming that your electric car can travel three miles per kWh, the electric vehicle can travel about 43 miles for $1.00. By comparison, if we assume that gas costs $2.50 per gallon, an average gasoline vehicle with a fuel efficiency of 22 miles per gallon will only be able to travel 10 miles for the same price. The distance traveled for a fuel cost of $1.00 is nearly four times as far with an electric vehicle.

All-electric vehicles are also high performance vehicles whose motors are not only quiet and smooth but require less maintenance than internal combustion engines. The driving experience can also be fun because AEV motors react quickly, making them responsive with good torque. AEVs are overall newer than their gas powered counterparts and are often more digitally connected with charging stations providing the option to control charging from an app.

AEVs on average have a shorter range than gas-powered cars. Most models ranging between 60 and 120 miles per charge and some luxury models reaching ranges of 300 miles per charge. For comparison, gas powered vehicles will average around 300 miles on a full tank of gas, and more fuel efficient vehicles getting much higher driving ranges. This may be an issue when looking at AEVs if you frequently take long trips. Availability of charging stations can make AEVs less suitable for activities like road trips.

Fueling an all-electric car can also be an issue. Fully recharging the battery pack with a Level 1 or Level 2 charger can take up to 8 hours, and even fast charging stations take 30 minutes to charge to 80 percent capacity. Electric car drivers have to plan more carefully, because running out of power can’t be solved by a quick stop at the gas pump.

Con: Electric cars are more expensive, and battery packs may need to be replaced

The battery packs within an electric car are expensive and may need to be replaced more than once over the lifetime of the car. All-electric vehicles are also more expensive than gas-powered cars, and the upfront cost of all-electric vehicle can also be prohibitive. However, the fuel cost savings, tax credits, and state incentives can help to offset this cost overall if they are available.

Overall, all-electric vehicles, like any vehicle, must be assessed based on personal needs and vehicle usage. There are many pros to owning an electric vehicle, such as fuel savings and reduced emissions, but this can come at the cost of relying on battery charging and higher costs. Consider what works best for you when looking into purchasing an all-electric vehicle.

Many of the same benefits of all-electric cars also apply to plug-in hybrid electric vehicles. PHEVs are great vehicles for reducing emissions and reducing fuel usage. For short trips, your PHEV may not need to switch away from its all electric motor, in which case the car emits no tailpipe emissions. Even more, PHEVs use 30 to 60 percent less fuel than conventional gas powered cars. If the electricity is sourced from renewable resources, the amount of greenhouse gas emissions can be reduced even further.

PHEVs also make great vehicles for those who cannot commit to a fully electric vehicle because of driving and recharging needs. While AEVs are limited to their battery range, the fuel backup in a plug-in hybrid means that when the battery runs out the vehicle can continue to run and even recharge the battery by using fuel. PHEVs usually have a better fuel economy than their conventional gas powered counterparts.

Much like an AEV, one of the hurdles to owning a PHEV is the amount of time it takes to recharge the battery. While PHEV batteries are smaller on average than those found in AEVs, a Level 1 charger may still take several hours to charge. A Level 2 charger can take one to four hours.  In addition, while fast charging does exist most PHEVs do not have this charging capability.

Another factor to consider is cost: like AEVs, PHEVs have a higher price tag than many gas powered vehicles. There are fuel savings, tax credits, and state incentives that can help offset these costs, and as production of PHEVs expands, these prices may come down.

Is an electric vehicle right for you?

All-electric cars and plug-in electric cars are great for drivers who want to reduce emissions, reduce fuel costs, and drive nice vehicles. However, battery charging can take a long time which may not fit driving needs and the upfront costs mean that the vehicles are a larger investment. It is ultimately up to the driver to decide if this kind of vehicle is the right fit and if so, taking steps even further to reduce emissions by integrating solar panel systems into their vehicle charging.

What is the downside to electric cars?

Some disadvantages to buying electric cars include the fact that electric cars can travel less distance than gas-powered vehicles, being able to find charging stations, and higher initial costs.

Is it worth buying an electric car?

Electric vehicles can be potentially less expensive than gas-powered vehicles because of a combination of saving money in maintenance as well as spending less to power your car compared to using fossil fuels.

What is the range of electric cars?

Most electric cars have a range of between 60-120 miles per charge with luxury cars having ranges of up to 300 miles on a full charge.

How do you charge an electric vehicle?

All AVE drivers have to do is find a charging station and plug-in wherever you park. Depending on where you go you may need to use an app, or debit/credit card.

Top technologies to shrink your energy use (and carbon footprint)