Browse solar inverters from top manufacturers on the EnergySage Buyer’s Guide. To learn about other solar energy system components, visit EnergySage's solar panel and solar battery buyer's guides.
Solar inverters are an essential component in any residential, commercial, or utility-scale solar energy system. Use this guide to compare solar inverter options and understand which products are best for your installation.
1 - 12 of 3,606
1 - 12 of 3,606

There are many solar inverters available - how do you know which one is best for you? Some important aspects to consider when selecting a solar inverter include wattage, efficiency, and warranty. All of these aspects plus more are considered in each solar inverters’ quality rating.

What is a solar inverter? Why is it important? 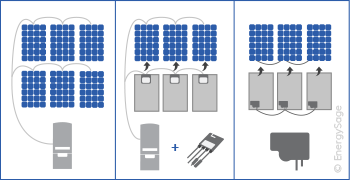 There are many ways to compare solar inverters. Here are a few key metrics to keep in mind:

A solar inverter’s efficiency is indicative of how well it converts DC electricity from solar panels into usable AC electricity. With any electrical conversion process, energy is lost in the form of heat – the lower the energy losses, the higher the efficiency. Higher efficiency inverters are typically more expensive but will help maximize the electricity output of your panel system.

Many solar inverter companies provide a warranty offering of at least 10 years, but some will offer up to 25. Importantly, check to see if your solar inverter is warrantied for the same length of time as your solar panels are. If you’re looking for added peace of mind, many inverter manufacturers offer extended warranties for an additional price (or your installer may offer it for free as an added perk of choosing their quote).

The EnergySage classification system incorporates technical specifications for solar inverters to compare their performance, durability, warranty and overall quality. By assessing each product across a range of metrics, the EnergySage rating system groups equipment into five different classifications: Poor, Fair, Good, Very Good and Excellent.
Solar inverters rated as Poor or Fair are at the low end of what is currently available in the market, or may be outdated models no longer produced by manufacturers, and rarely stocked by solar installation companies. Equipment receiving Good, Very Good or Excellent ratings must meet a baseline set of criteria rigorously developed so that you can be confident that your solar energy system will meet your needs.

Inverter types: An overview of the major types of solar inverters.
Microinverters vs. power optimizers: Learn how the two MLPE options stack up against one another.
Solar inverter sizing: All about how solar inverters are sized to match your solar panel system.
Get Quotes
Get Solar Quotes