Save money by installing solar panels in CO.

Thanks to the Centennial State's 300 days of sunshine each year, Colorado solar shoppers are saving thousands on their electricity bills with solar. 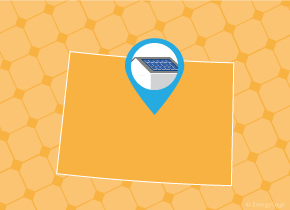 For Colorado, environmental protection is one of the most important considerations of the state. It should come as no surprise then that the Centennial State is among the leaders in solar energy capacity to this day. While the residents of Colorado have been able to benefit from solar energy for almost two decades now, Colorado continues to incentivize people to go green with a strong net metering program and significant tax exemptions.

How much do solar panels cost in Colorado?

A critical question many property owners have when they are considering installing solar panels is the amount of time it will take to recover their initial investment through electricity savings. This question is defined as the solar payback period. For Colorado, the average solar payback period is 12.62 years.

Another choice that solar shoppers have to face is how to pay for a solar panel system. Fortunately, there are many financing options available for property owners looking to invest in solar energy. Cash purchases are one common method to pay for solar and often lead to the most long-term value for your money. For those who prefer $0-down options, solar loans and solar lease/PPAs are available to help finance a solar energy system.

See the complete list of top solar installers in Colorado

See the cost of solar in CO cities and towns

What solar panels should I install in Colorado?

There are plenty of options to consider when choosing the solar panels, inverters, racking systems, and batteries to use for your solar panel installation. With the number of options available today, it’s important for you to understand various factors that distinguish one component apart from another. For example, the best solar panels available may have premium efficiencies and warranties, but will typically be more costly. However, depending on the size of the installation, you’ll need to determine whether high-efficiency solar panels that can produce more electricity are worthwhile. Also, your appetite for risk can help determine which solar warranties best fit your needs. These are just a few of the many factors to consider when selecting solar panel equipment. To find more info, check out EnergySage’s Solar Decision Guide.

How much energy can I get from solar in Colorado?

Aside from the power output and efficiency of the solar equipment you choose to install, the amount of energy you generate with solar panels in Colorado is directly related to the amount of sunlight that hits your panels. Fortunately, Colorado receives over 300 days of sun a year, allowing solar panel owners to maximize electricity production and savings.

There are additional factors that determine how much solar electricity you can produce: shading, panel orientation, and panel angle are all important in calculating your production estimate, a prediction of how much energy your solar installation will produce over time. You can see an estimate of how much you can save with solar using the EnergySage Solar Calculator – the calculator will take into account site-specific conditions like shade and geography.

Solar incentives in Colorado can help you reduce the overall price of going solar. Learn more about why solar panels are such a great investment in Colorado.

Learn about solar incentives in CO

What rebates and incentives are there in Colorado for solar?

Outside of the federal ITC, Colorado has additional incentives for going solar that are dependent on your area and utility company. Of note are a multitude of local solar rebates, and tax exemptions for your property and solar panel purchases. Additionally, Colorado has established a favorable net metering program that further incentivizes producers of solar energy. To learn more about the financial incentives available for solar installations in Colorado, check out the complete overview of the state’s best solar incentives.

The Centennial State is well known for its magnificent scenery of mountains, rivers, and plains. As part of its distinct geographic conditions, the state is fortunate to see plenty of sunlight throughout the year. This, coupled with the state’s concern to protect its environment, has made solar power an attractive energy alternative to its residents. As of 2018, the Solar Energy Industries Association (SEIA) reports that Colorado installed 1,055.17 MW of solar capacity, ranking it 12th in the nation. While this ranking falls short of the top ten, it should be noted that CO surged forward compared to 2017. Based on its trending growth and the state’s history of pro-renewable policies, it is evident that the solar industry will continue to be a significant feature of Colorado’s energy plan going forward.

Colorado has not been shy about incentivizing solar energy. In fact, they were the first state to enact a Renewable Portfolio Standard (RPS) by ballot initiative when voters approved Amendment 37 in November 2004. As of 2019, the RPS requirement has been increased three times by the Colorado legislature since 2004 as citizens have become more aware of the numerous benefits of renewable energy. The state has established a commendable threshold requiring investor-owned utilities (IOUs) to generate at least 30 percent of its energy from renewables by 2030. More specifically, IOUs have to serve 3 percent of their electric retail sales from distributed generation (DG) by 2020, which includes but is not limited to residential solar panels. A strong RPS and DG carve-out are key features in Colorado’s strong solar policy platform that should give confidence for Colorado residents pursuing solar energy installations.

Amendment 37 not only created Colorado’s first RPS program, but also required the states Public Utilities Commission to adopt standards for net metering and interconnection. These supporting regulatory policies have been crucial in developing Colorado’s solar energy industry. The state’s net metering program has especially stood out as one of the best in the nation. The program ensures that owners of solar energy systems receive full credit for every bit of energy that is produced. The best part is that the utility will keep track of the additional surplus energy that has been stored up over the course of a year and will reimburse you monetarily for the total amount of solar that you’ve contributed to the grid.

As far as the rest of Colorado’s solar policy history goes, the state has always maintained tax exemptions and local solar rebates for homeowners installing solar. Tax exemptions for the state began in 2009 with the passage of the Sales and Use Tax Exemption for Renewable Energy Equipment, which ensured that residents wouldn’t need to pay any sales tax on the purchase of their system. In the following year, the Property Tax Exemption for Residential Renewable Energy Equipment passed, making renewable energy property like residential solar installations exempt from Colorado property taxation. For rebates, local utilities have provided a variety of options to incentivize their own customers to go solar in order to meet the state’s RPS guidelines. For example, Holy Cross Energy has offered its customers since 2005 rebates on a per-kilowatt (kW) basis to reduce the costs of going solar. For the first 6 kW generated the incentive is $750 and is then tiered down for larger systems. In 2011, another important local rebate was enacted called EnergySmart Colorado. This program additionally offers local rebates for residential solar installations in specific counties that can reimburse anywhere from $400 to $3,000.

More recently, the state has found additional creative incentives for residential solar purchases through various loan programs. For instance, the State of Colorado will help pay your mortgage if you install energy efficiency upgrades and a renewable energy system within the first 120 days of buying your new home. Another example is the Residential Energy Upgrade (RENU) Loan Program that was passed in August 2018, which offers loans for home energy upgrades.

Even if you don’t want to put solar panels up on your home or property, Colorado has made sure there are other options available through community solar programs. In fact, the state was one of the earliest proponents of the model and in 2019 leads the nation with nearly 70 projects in operation generating more than 50 megawatts (MW). This model offers potential residents to purchase a portion of the power produced by community solar farms and receive that credit on their electric bill, thus offering the benefits of solar without installing panels on your roof.