Save money by installing solar panels in GA.

Thanks to abundant sunshine, the Peach State has some of the strongest potential for solar power in the country. 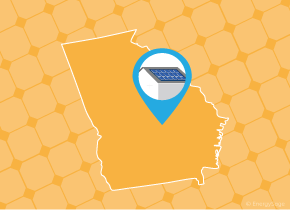 Known for more than just delicious peaches, Georgia has a long solar history and is poised to be one of the fastest-growing solar markets in coming years. With a strong net metering policy and plenty of sunlight hours throughout the year, Georgia is an ideal area for property owners who are considering installing solar panels. Going solar in the Peach State is an excellent option for energy-conscious home and business owners.

How much do solar panels cost in Georgia?

Another calculation that potential solar buyers have to consider is the solar payback period. This term tells us as at what time you will recover your initial investment through electricity savings from your solar system. For Georgia, the average solar payback period is 13.44 years.

Additionally, it is important to consider how the consumer will pay for a solar panel system. Fortunately, there are many financial options available to ensure the customer can afford installations. Cash purchases are one common method to pay for solar and often lead to the most long-term value for your money. If an upfront purchase isn’t right for you, solar loans and solar lease/PPAs are available to help finance a solar energy system.

See the complete list of top solar installers in Georgia

See the cost of solar in GA cities and towns

What solar panels should I install in Georgia?

How much energy can I get from solar in Georgia?

Aside from the power output of the solar equipment you choose to install, the amount of energy you generate with solar panels in Georgia is directly related to the amount of sunlight that hits your panels. This is good news for Georgians considering going solar: Georgia ranks in the top half of US states for the number of peak sun hours received per year, giving the Peach State excellent solar potential.

Solar incentives in Georgia can help you reduce the overall price of going solar. Learn more about why solar panels are such a great investment in Georgia.

Learn about solar incentives in GA

What rebates and incentives are there in Georgia for solar?

Beyond the federal ITC, Georgia offers additional incentives for going solar, depending on where you live and who your utility company is. Georgia’s net metering policy and high solar potential mean that purchasing a solar panel system or participating in a community solar program are both great deals. To learn more about Georgia’s best financial incentives for solar, check out our complete overview of the state’s best solar incentives.

Georgia typically ranks on the edge of the top ten in the SEIA national rankings, having installed over 1,500 megawatts (MW) of solar capacity throughout the state as of early 2019. Unlike other leading solar states, who primarily rely on strong solar incentives for growing the industry, Georgia has focused on a more market driven approach to building the industry, leaning on low-cost utility-scale solar farms.

Nevertheless, the first solar-related policy issued by Georgia can be traced back to the early stages of the solar industry. In 1978, the state’s General Assembly found it necessary to consider alternative energy sources in the wake of the oil crisis, and passed the the Solar Easements Act of 1978, which gave solar owners assurance of continued access to sunlight for their systems. While not a financially based incentive for residents, this policy was important in demonstrating the state’s intent for solar.

However, it was not until 2001 that additional solar policies were passed in-state. The Cogeneration and Distribution Act of 2001 quickly became very important to the Peach State’s solar industry, as it created a net metering program for residents to be able to sell net excess generation from their solar energy systems back to utilities in order to decrease their energy bill. Net metering is a crucial policy for compensating homeowners for installing independent energy systems and is a fixture in almost every leading solar state. While Georgia’s net metering doesn’t provide all of the benefits afforded by similar policies in leading solar states, it is still paramount to the success of the state’s solar industry.

Aside from net metering, Georgia has seen few other rebates and incentives for residents to go solar. In 2008, legislation established personal tax credits of 35 percent of the cost of renewable energy systems (including installation). However, the funds for the tax credit program ran out in 2014, much to the dismay of clean energy advocates. The majority of solar rebates offered today are through local utilities such as Central Georgia EMC, Greystone Power, and Jackson EMC, which have a small customer base. The largest utility in state, Georgia Power, is participating in solar buyback programs, though applicants have experienced long waiting periods as the utility awaits more capacity and investment.

The state approved Georgia Power’s 2016 Integrated Resource Plan (IRP), which called for increasing their renewable energy portfolio by 1,200 MW through its Renewable Energy Development Initiative (REDI). Additionally, as solar has become more affordable, Georgia has started to encourage rooftop or smaller-scale distributed solar through the Solar Power Free Market Financing Act of 2015. This regulation establishes that power purchase agreements (PPAs) are a lawful way to finance the construction and operation of a solar electric generation system, which will continue to make solar more attractive for everyone involved in the market.

While solar policy in Georgia has been sparse, many electric utilities have come up with favorable clean energy plans to encourage the growth of the industry so far. Given the city of Atlanta’s pledge to be 100 percent renewable by the year 2035, it looks like the industry will continue to grow in Georgia for years to come.