Save money by installing solar panels in LA.

Thanks to one of the biggest solar tax credits in the United States, the Bayou State is one of the best places in the country to go solar. 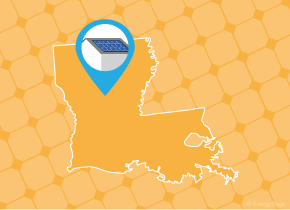 This Southeastern state known for Mardi Gras and jazz is also a great place for solar energy. Louisiana has solar incentives–including net metering and low-interest home improvement loans to homeowners–that improve the financials of going solar. In fact, solar incentives in The Pelican State can help you save thousands on your electricity costs.

How much do solar panels cost in Louisiana?

Another calculation that potential solar buyers have to consider is the solar payback period. This term tells us as at what time you will recover your initial investment through electricity savings from your solar system. For Louisiana, the average solar payback period is 11.45 years.

See the complete list of top solar installers in Louisiana

See the cost of solar in LA cities and towns

What solar panels should I install in Louisiana?

How much energy can I get from solar in Louisiana?

Aside from the power output of the solar equipment you choose to install, the amount of energy you generate with solar panels in Illinois is directly related to the amount of sunlight that hits your panels. Louisiana ranks in the top 20 of US states for the number of peak sun hours received per year and sees over 100 clear days per year, affording the Pelican State excellent solar potential.

Solar incentives in Louisiana can help you reduce the overall price of going solar. Learn more about why solar panels are such a great investment in Louisiana.

Learn about solar incentives in LA

What rebates and incentives are there in Louisiana for solar?

Besides the federal ITC, Louisiana has additional incentives for going solar that are dependent on your area and utility company. Of note are the availability of net metering and low-interest home improvement loans through the Home Energy Loan Program (HELP). To learn more about Louisiana’s best financial incentives for solar, check out our complete overview of the state’s best solar incentives.

Fueled by dropping solar prices and available state financial incentives, Louisiana has seen a major uptick in its solar capacity in recent years, with all 100 megawatts (MW) installed since 2013. According to SEIA’s national rankings, in 2019 the state’s solar capacity ranks 37th in the nation, which is a big jump from the state’s previous ranking of 45th in 2017.

The first piece of solar legislation passed in the state was the Solar Energy System Exemption in 2003. Specifically, this act stipulates installed solar systems will be treated as personal property and owners will be exempt from ad valorem taxation by the state. This form of property tax incentive has been a staple throughout the country for encouraging property owners to install renewable energy systems like solar panels.

Later in 2003, Louisiana further bolstered its solar policy portfolio by implementing net metering. This type of program allows distributed generation from property-owned energy systems to be sold back to utilities so that residents can receive value for the energy they individually produce. The rate at which utilities buy back the solar varies state to state: Louisiana investor-owned utilities compensate property owners with net excess generation at the avoided-cost price. Though there is room for improvement in Louisiana’s net metering policies–i.e., the state could raise the cap limit–this policy has been crucial for the residential solar industry.

The next action Louisiana took to make solar more accessible was to develop and provide low-interest solar loans through the Home Energy Loan Program (HELP). Created in 2005 and administered by the Louisiana Department of Natural Resources, the program offers eligible homeowners up to five-year loans that are used to improve the energy footprint of their homes, like installing solar photovoltaic (PV) panels. Furthermore, the Department subsidizes half of the financing for energy efficiency enhancements up to a maximum of $6,000.

Louisiana lawmakers went on to enact the Solar Rights regulatory policy in 2010, which guarantees that certain entities cannot restrict a property owner from installing a solar collector or any system or device that uses sunlight as an energy source. While this act does not provide financial incentives, safeguarding the rights of property owners to invest in and produce clean, solar energy is an important confidence boost to the industry.

In the same year, Louisiana garnered interest from solar advocates nationwide as the state’s Public Service Commission (PSC) unanimously approved the Renewable Energy Pilot Program to determine whether a Renewable Portfolio Standard (RPS) would be suitable for the state. The implications for the state’s solar industry were substantial given that roughly half of the growth in U.S. renewable energy generation and capacity since 2000 can be attributed to RPS-type policies. Unfortunately for solar advocates, Louisiana concluded in 2013 that a mandatory RPS was not necessary in-state.

The most impactful solar policy in Louisiana was the solar tax credit program in 2008. This financial incentive provided a 50 percent tax credit up to $12,500 for the purchase of installing a solar energy system. Residents raced to take advantage of this generous state incentive; however, controversy ensued when the legislature shuttered the program two years early in 2015.