The impact of electricity rates on solar savings 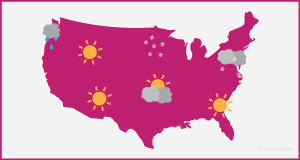 You don’t need to live somewhere sunny to enjoy the financial benefits of solar. While solar panels do produce more electricity in sunnier states, the amount you save by installing a solar energy system is primarily determined by the costs that you won’t have to pay to your utility company moving forward.

There is a strong correlation between the cost of electricity in your state and the savings you will see when you go solar. In general, the higher your electricity rates, the more money you will save by going solar.

The chart below illustrates how this works across the country. We used PV Watts— a tool developed by the Department of Energy’s National Renewable Energy Laboratory — to estimate the amount of energy a solar power system will generate across the United States. Then we gathered key information for each city to show the annual savings benefits possible.

The following table shows the results of our calculations:

Sunshine aside, your solar savings are guaranteed

The cities most of us would consider sunny are spread out in the rankings. For example, solar panels in Arizona will produce the most electricity out of all of these states and will result in savings of $924 per year. That’s similar to savings in Wisconsin, even though a system there is expected to produce about 2,000 fewer kWh per year. Again, this is a function of the electricity costs, which are much higher in Arizona vs. Wisconsin.