Learn About Solar  |  Solar 101  |  What Are Solar Panels?  |  Microinverter and Power Optimizer Manufacturers 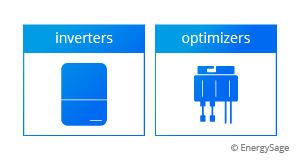 The standard inverter option for rooftop solar panel systems has historically been the string inverter, or central inverter, in which all solar panels in the system are connected to a single inverter. Thanks to advances in solar technologies, more solar installers are offering module-level power electronics (MLPEs) as an alternative to string inverters. As you shop for your solar power system, there are two MLPE options for you to consider: micro-inverters and power optimizers.

However, as is often the case, these benefits come at a price. Systems that use micro-inverters or power optimizers are generally more expensive than systems that use string inverters.

Solar technologies: Do you need micro-inverters or power optimizers?

How to evaluate micro-inverters and power optimizers

Once you decide to install a solar energy system with MLPE equipment, the next step is to determine which solar technology best suits your needs. Consider warranties, operating temperature range, and efficiency when comparing your micro-inverter and power optimizer options.

Warranties provide a good indication of the reliability of a company’s products, and are readily available on the websites of most micro-inverter and optimizer manufacturers. All major MLPE companies highlighted below offer 25-year warranties on their micro-inverters and power optimizers.

Companies may require other products, such as communications gateways or central inverters, for their MLPE systems to function properly. These devices may have separate warranties, which are generally shorter than those of the micro-inverters and power optimizers.

Additionally, while a warranty covers parts, it may not include other costs associated with replacement, such as shipping and labor to replace a product. Confirm these terms with your solar installer.

Micro-inverters and power optimizers are electronic devices, and are sensitive to heat just like your phone or laptop. They have been engineered to keep themselves cool but do produce a small amount of heat during normal operation. Because they are typically located outside, they are more exposed than most electronics to extreme heat. For this reason, higher operational temperature ranges are preferable.

Peak efficiency refers to how well a device performs in ideal conditions, when your solar panels are producing power at their maximum capacity. It can help you understand how much power is lost during conversion, and is comparable to the maximum miles-per-gallon fuel economy of a car.

Weighted efficiency takes into account fluctuations in solar panel output throughout the day. It is an indicator of how well an inverter will perform in the field and how much electricity you can expect your solar PV system to produce. Weighted efficiency is comparable to an average fuel economy calculated using the fuel economies of both highway and city driving situations.

While the MLPE industry is growing rapidly, a few companies dominate the market. Below, EnergySage has evaluated each of the leading micro-inverter and power optimizer manufacturers supplying the U.S. market.

SolarEdge is the global leader in power optimizers based in Israel. The company’s optimizers are used with its proprietary string inverters.

Tigo Energy’s power optimizers can be combined with various brands of inverters and solar panels. According to the company, Tigo’s residential market share was about 10 percent in 2014.

You can further research micro-inverter and power optimizer manufacturers in EnergySage’s supplier search or compare quotes from high quality, pre-screened solar installers in your area who offer these options by shopping in the EnergySage Solar Marketplace.

In the table below we have detailed the key metrics for each of the two largest MLPE manufacturers in the US residential market (Enphase and SolarEdge). We have also included other useful information about each company and its products.