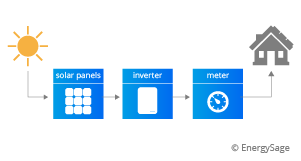 If you are considering a solar panel system for your home, one of the key decisions you need to make is the type of inverter to install. Inverters convert direct current (DC) electricity generated by your solar panels into usable alternating current (AC) electricity. Given the complex power electronics and software contained within, inverters are vital to the success of your solar power system.

String inverters are by far the most commonly deployed option globally and comprise the vast majority of the world’s inverter market, especially for larger scale systems. However, MLPE technologies have gained in popularity and market share over the last five years as their costs have come down. 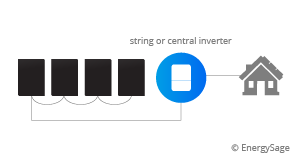 String inverters are the most cost-effective inverter option available in the U.S. Traditionally, solar installation companies generally offered systems with string inverters if your roof had limited shading throughout the day and did not face in multiple directions (such as a gabled roof). However, recent hardware and software updates from the major string inverter companies now make them applicable in a wider set of circumstances.

Your solar panels are arranged into groups connected by “strings”, hence their name. Multiple strings of panels can be connected to a single inverter, which transforms the DC electricity produced by the panels into appliance-friendly AC electricity.

String inverter technology has been used for decades. It is a very reliable, tried-and-true technology, though may not be suitable for certain types of installations. Although modern solar technology allows individual panels to continue producing power even if a part of the panel is shaded, without module level power electronics, string inverters can only optimize power output at the string level, not at the individual panel level. This means string inverter systems may not be right for homes that are prone to shading throughout the day. However, their ease of install and lower price point make them attractive to many homeowners and installers.

One of the most common reasons for individual solar panels to produce less power or stop producing power altogether is shading from nearby objects. If your roof is prone to shading throughout the day or in certain seasons, you could either remove the source of the shade (e.g. cut down a tree) or install the panels where they will not be shaded.

EnergySage’s database of solar reviews has comprehensive information about specific installers, financiers, and equipment manufacturers, including manufacturers of string inverters, microinverters, and power optimizers. If you are looking for a review of MLPE technologies, EnergySage has also developed a comprehensive comparison of micro-inverter and power optimizer options. 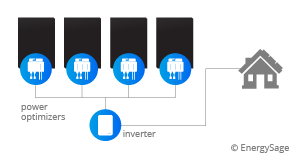 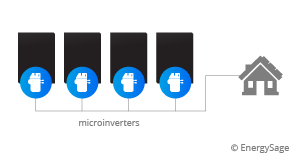 Microinverters, another form of module level power electronics, are gaining popularity, particularly for residential solar systems. Microinverters tend to be more expensive than string inverters or power optimizers, however recent declines in their costs have made them a more competitive option.

How “smart modules” use micro-inverters and power optimizers