Save money by installing solar panels in FL.

They don't call it the Sunshine State for nothing – all that sunlight means Florida has some of the best solar potential in the country. 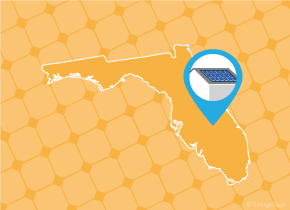 Welcome to the Sunshine State! Florida stands up to its name with plenty of days of sun per year. Floridians can take advantage their sunny days by going solar with the aid of generous property and sales tax exemptions, as well as favorable incentives like net metering programs, which allow your solar panels to save you money even when you’re not home. Adding to the incredible solar potential of Florida, these rebates and solar programs help make Florida an ideal area for property owners to consider going solar.

How much do solar panels cost in Florida?

Another calculation that potential solar buyers have to consider is the solar payback period. This term tells us as at what time you will recover your initial investment through electricity savings from your solar system. For Florida, the average solar payback period is 10.21 years.

Additionally, it is important to consider how the consumer will pay for a solar panel system. Fortunately, there are many financial options available to ensure the customer can afford installations. Cash purchases are one common method to pay for solar and often lead to the most long-term value for your money. If an upfront purchase isn’t right for you, solar loans and solar lease/PPAs are available to help finance a solar energy system.

See the complete list of top solar installers in Florida

See the cost of solar in FL cities and towns

What solar panels should I install in Florida?

How much energy can I get from solar in Florida?

Aside from the power output of the solar equipment you choose to install, the amount of energy you generate with solar panels in California is directly related to the amount of sunlight that hits your panels. California is one of the sunniest states in the U.S.; therefore, a solar panel installation in the state will likely produce more energy annually than a system of the same size installed elsewhere, such as in the Northeast.

There are additional factors that determine how much solar electricity you can produce: shading and panel angle are important in calculating your production estimate, a prediction of how much energy your solar installation will produce over time. You can see an estimate of how much you can save with solar using the EnergySage Solar Calculator – the calculator will take into account site-specific conditions like shade and geography.

Solar incentives in Florida can help you reduce the overall price of going solar. Learn more about why solar panels are such a great investment in Florida.

Learn about solar incentives in FL

What rebates and incentives are there in Florida for solar?

Beyond the federal ITC, Florida has additional incentives for going solar that are dependent on your area and utility company. The Sunshine State’s net metering programs allow your solar panels to continue to work to save you money, even when you are out of the house. What’s more, Florida has established generous property and sales tax exemptions, helping you get the most out of your solar purchase. To learn more about Florida’s best financial incentives for solar, check out our complete overview of the state’s best solar incentives.

Although Florida is known as the Sunshine State, solar growth has only recently begun to take off in the state, as a result of low electricity prices and laws that were unfriendly to solar development. At present, Florida ranks 8th in SEIA’s national ranking with over 2,000 megawatts (MW) of solar capacity installed throughout the state. Even more noteworthy is that the SEIA projects the state to rank 2nd in solar capacity within the next five years.

One of the first notable policies that stimulated the residential solar industry in Florida is the state’s Solar and CHP Sales Tax Exemption. After taking effect in 1997, Floridians became exempt from the state’s sales and use tax when purchasing solar energy systems. Although originally set to expire in 2002, the financial incentive was extended three more years and, eventually, made permanent in 2005. The 6 percent savings Floridians receive from this exemption can make a big difference on the upfront cost of installing solar panels.

Florida’s most notable regulatory policy for its residents has been its net metering program. Despite being introduced later than net metering policies in other states, when Florida’s net metering program was enacted by the state’s Public Service Commission (PSC) in 2008 it marked a turning point for renewable energy for Floridians. For any customers of investor-owned utilities with their own solar systems, it became much easier to cut prices on their electricity bills: any surplus energy or net excess generation (NEG) produced by a solar system is carried forward as a credit at the full retail rate to the solar owner’s next bill. Eventually, at the end of a 12-month billing period, the utility pays the solar owner for any remaining NEG at the utility’s avoided cost rate.

Outside of these solar specific policies, Florida historically has trailed other states in setting and increasing Renewable Portfolio Standard (RPS). Most states successfully contributed to the growth of the renewable energy industry with RPS policies; however, Florida remains one of the few states to not have any such policy.

While Florida’s solar policy history has not always trended in the right direction, residents can still be optimistic for more clean energy on the horizon. Much of the state’s total solar capacity was built in just the past three years and meets only 1 percent of the state’s electricity needs, meaning there is plenty of room for growth in Florida. And with strong commitments to build solar from Florida Power and Light, one of the main utilities in-state, the solar industry in Florida appears set for major growth in the coming years.