Save money by installing solar panels in OH.

Going solar in the Buckeye State is easier than ever, and Ohioans are saving hundreds on their electricity bills with solar. 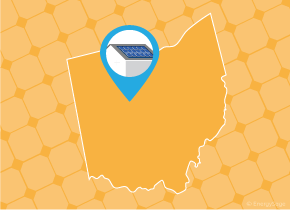 Not only have eight US Presidents come out of Ohio, but so has a burgeoning solar industry. The Buckeye state continues to incentive its residents to go green through a strong net metering program, solar renewable energy certificates (SRECs), and state sponsored interest rate reductions.

How much do solar panels cost in Ohio?

See the complete list of top solar installers in Ohio

See the cost of solar in OH cities and towns

What solar panels should I install in Ohio?

How much energy can I get from solar in Ohio?

Aside from the power output of the solar equipment you choose to install, the amount of energy you generate with solar panels in Ohio is directly related to the amount of sunlight that hits your panels. Unfortunately, Ohio falls on the low end of peak sun hours. The good news is that while knowing your geographic areas expected energy output is important, often the incentives and policies of your state play a larger role in determining the best deals and returns for your solar purchase.

Solar incentives in Ohio can help you reduce the overall price of going solar. Learn more about why solar panels are such a great investment in Ohio.

Learn about solar incentives in OH

What rebates and incentives are there in Ohio for solar?

Besides the federal ITC, Ohio has additional incentives for going solar that are dependent on your area and utility company. Of note are Solar Renewable Energy Certificates (SRECs), net metering programs, and state sponsored interest rate reductions. To learn more about Ohio’s best financial incentives for solar, check out our complete overview of the state’s best solar incentives.

For the Buckeye state, solar energy has become a critical part of its future energy plans. Over the past decade, solar has steadily grown and become more available for residents to access. According to the 2018 SEIA national ranking, Ohio ranks 29th in the nation with a total installed solar capacity of just over 200 megawatts (MW). However, SEIA projects that in five years, Ohio will catapult all the way to 19th on their rankings list, which should make residents excited about the future of solar in their state. While decreasing solar costs and growing environmental concerns have definitely been crucial for the solar market, Ohio’s solar policies have especially driven growth and increased accessibility for its residents.

The first solar policy Ohio enacted occurred in 1979 when the state implemented Solar Easements regulations. Although the policy didn’t focus on financial incentives, it recognized solar energy usage as a property right and established that homeowners can be ensured that proper sunlight is made available to those who operate solar-energy systems.

Ohio next passed solar policies in 1999 when the state’s electric-utility restructuring legislation required utilities to adopt net metering and a public benefits fund. The state’s net metering program, which is an energy billing system that provides homeowners credit based on how much net excess generation (NEG) is sent back to the electric grid, has been an important factor in the state’s solar growth. While other state net metering programs provide the lower wholesale or avoided cost rate for excess energy sold back to the grid, Ohio’s utilities compensate their customers at the higher unbundled generation rate over the years. However, Ohio is one of only a handful of states to allow ratepayers to request a cash check for their NEG over a 12-month period.

Another piece of notable legislation to emerge from the state’s 1999 utility restructuring was the Advanced Energy Fund. Funded by a 9-cent surcharge on ratepayers utility bills, the objective of this public benefits fund is to support renewable and energy efficiency projects through grants and subsidies. Although the fund was retired after a 2010 amendment, it has had lasting positive effects for the state. For example, the state estimates that 120 companies are saving a total of $13 million in electricity and natural gas costs due to improvements supported by the Fund. Additionally, the remaining balance of the Fund has been used to help supplement the Energy Loan Fund that was issued in 2011 and has helped a variety of businesses and organizations achieve energy improvements such as solar installations.

While all of these aforementioned policies have been crucial to the development of solar energy in Ohio, it is fair to say that the state’s Renewable Portfolio Standard (RPS) program has been its most influential driver of growth to this point. Throughout the country, state energy requirements have probably been the most significant policy for clean energy development.

Officially titled the “Alternative Energy Portfolio Standard” (AEPS), Ohio required in 2008 that utilities must supply 12.5 percent of their electricity from renewable energy by 2025, along with a solar carve-out of 0.5 percent by the same target date. The AEPS has faced constant instability over the past decade. In fact, Ohio became the first state in 2014 to freeze its RPS program, which caused a huge blow to the renewable and solar energy industries. It wasn’t until 2017, when the state reactivated its RPS, that companies and residents regained confidence in the renewable industry. Because of the freeze-out, the state’s RPS target date was pushed back to 2027. Despite these setbacks, it now appears that Ohio is firmly committed to achieving this policy objective, which will allow solar and other clean energies to accomplish their projected significant growth over the next five years.

Complementing its net metering and RPS foundational policies, Ohio has also crafted a few notable financial incentives to help utilities reach their compliance levels and make solar more accessible to everyone. For example, Ohio waives sales tax on solar installations, which saves a noteworthy 5.75 percent from the total cost. Another example has been the Energy Conservation for Ohioans (ECO-Link) Program, which was implemented in 2009. The benefit of this policy is that residents receive a 3 percent interest rate reduction for successfully applying for the program, thus making financing solar a bit easier. Also in 2009, Ohio began its Solar Renewable Energy Credit (SREC) market to incentive utilities to pay individual solar producers for every one MW-hour of solar energy produced. Although the value of SRECs has dropped considerably over the years, they still are helping many solar producers achieve additional credit for their investment.