Save money by installing solar panels in DE.

Going solar in the First State is easier than ever, and Delaware homeowners can save thousands on their electricity bills with solar. 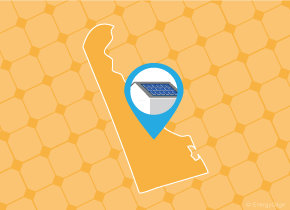 The state of Delaware is home to many beautiful places along the Atlantic coast. Green power, like solar, helps to maintain the natural beauty of The First State for future generations. Delaware’s strong RPS straightforward net metering policy, and available solar rebates programs have helped the state to become one of the best places to switch to solar energy in the country.

How much do solar panels cost in Delaware?

Another calculation that potential solar buyers have to consider is the solar payback period. This term tells us as at what time you will recover your initial investment through electricity savings from your solar system. For Delaware, the average solar payback period is 8.91 years.

See the complete list of top solar installers in Delaware

See the cost of solar in DE cities and towns

What solar panels should I install in Delaware?

For property owners, you now can customize your solar panels, inverters, racking systems, and batteries, as well as the general aesthetic of the installation. This customizability has made it important for solar consumers to understand these various factors. For example, the best solar panels available may have premium efficiencies and warranties, but will typically be more costly. However, depending on the size of the installation, you’ll need to determine whether high-efficiency solar panels that can produce more electricity are worthwhile. Also, your appetite for risk can help determine which solar warranties best fit your needs. These are just a few of the many factors to consider when selecting solar panel equipment. For more information, check out EnergySage's Solar Decision Guide.

How much energy can I get from solar in Delaware?

Aside from the power output of the solar equipment you choose to install, the amount of energy you generate with solar panels in Delaware is directly related to the amount of sunlight that hits your panels. Delaware receives an average of 97 clear days per year, so annual energy produced will not consistently be as robust compared to that of the sunnier states. However, while it is helpful to know the amount of energy output you can expect from your geographic region, the incentives and policies of the state are much more significant factors for finding the best deals and returns.

Solar incentives in Delaware can help you reduce the overall price of going solar. Learn more about why solar panels are such a great investment in Delaware.

Learn about solar incentives in DE

What rebates and incentives are there in Delaware for solar?

Beyond the federal ITC, Delaware has additional incentives for going solar that are dependent upon your utility company. Delaware stands out for its strong net metering policy, solar rebates, and solar renewable energy certificate programs, which make solar purchases within Delaware a smart financial option and a great deal for shoppers. To learn more about Delaware’s best financial incentives for solar, check out our complete overview of the state’s best solar incentives.

The solar industry has experienced rapid growth in the First State in recent years. Despite receiving less sunshine than other states and its smaller geographical size, Delaware has installed 122.95 megawatts (MW) of solar energy capacity placing them 33rd on the SEIA national ranking of states in 2018. The state’s burgeoning solar industry can largely be credited to a few key policies that have been developed over the past two decades.

The first of these policies was the introduction of net metering in 1999 at the same time as the Delaware Public Service Commission approved the deregulation of its utilities. Net metering laws are vital to the success of solar energy, as they track the amount of power generated from an installation plus household electricity consumption so that solar owners are billed on “net”, even if they don’t use electricity at the same time their panels are producing it. In Delaware, net metering has expanded over the years to be more inclusive and incentivize more types of customers to participate in the program. Currently, Delaware has one of the best net metering programs in the nation. While some states will only value the surplus energy or net excess generation at the lower wholesale rate, Delaware ensures that customers get the full retail rate so that residents enjoy the full benefits of producing clean solar energy. This straightforward program will continue to make solar energy an attractive option in Delaware in the coming years.

Another significant policy that has heavily supplemented the solar energy industry in Delaware is its Renewable Portfolio Standard (RPS) program. The forward-thinking energy mandate was passed in 2005 to originally require retail electric suppliers to purchase 10 percent of the electricity sold in the state from renewable sources by the compliance year (CY) 2019-2020. Lawmakers further increased the RPS goal to 25 percent by CY 2025-2026 in July 2010. The state’s RPS has a specific mandate for solar energy - a solar carve-out requires 3.50 percent of total electric sales must be met with solar. Along with meeting this goal, in 2008 Delaware established a Solar Renewable Energy Credit (SREC) market. The financial incentive from Delaware for residents is they receive $0.05 per kWh for their solar system generation in which they are then eligible to sell their SRECs. SREC owners then can sell their accumulated credits back to the grid or third-party brokers. Utilities are especially interested in acquiring SRECs as a mechanism to meet Delaware’s solar RPS each year to avoid facing state-issued fines. Ultimately, Delaware’s RPS program and SREC market will continue to attract residents towards the benefits of solar energy.

What’s more, the state’s utilities offer various rebates to their customers for renewable energy initiatives. The first utility company to begin this practice was Delmarva Power when the General Assembly founded the Green Energy Fund and required the utility to fund it using contributions from their customers. To build the clean energy fund, Delmarva originally charged their customers $0.000178 per kWh, but this was upped to $0.000356 per kWh in 2007 (less than $5 per customer per year). This now provides the Fund approximately $2.6 million annually for efficiency and renewable programs and $800,000 for annually low-income clean energy and conservation programs. Over its lifespan, Delmarva has awarded over $55 million for renewable energy projects helping to fund homeowners, local businesses, fire departments, churches, and farmers. In 2005, the Delaware Electric Cooperative (DEC) and Delaware Municipal Electric Corporation (DEMEC), which represents nine municipal utilities, created their own individual green energy programs like Delmarva’s.

The policies Delaware has enacted guarantee that solar energy will continue to flourish in the Small Wonder State. This goes to show how significant a couple of key policies can have on the solar industry in a state.