Save money by installing solar panels in OR.

Solar power is more popular than ever in the Beaver State thanks to excellent financial incentives and significant environmental benefits. 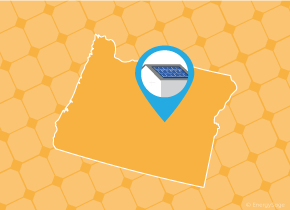 The beautiful state of Oregon is known for its forests, mountains, farms and beaches. Oregon legislation has been hard at work protecting the natural beauty of the Beaver State with some of the best solar incentives. Oregon’s ambitious Renewable Portfolio Standard has helped bring about incentives from residential energy tax credits to local and municipal utility rebates. The outlook for solar energy in Oregon is bright!

How much do solar panels cost in Oregon?

See the complete list of top solar installers in Oregon

See the cost of solar in OR cities and towns

What solar panels should I install in Oregon?

How much energy can I get from solar in Oregon?

Aside from the power output of the solar equipment you choose to install, the amount of energy you generate with solar panels in Oregon is directly related to the amount of sunlight that hits your panels. While Oregon ranks low in average peak sun hours, they have made great breakthroughs in solar technology have very high standards for renewable energy sources.

Solar incentives in Oregon can help you reduce the overall price of going solar. Learn more about why solar panels are such a great investment in Oregon.

Learn about solar incentives in OR

What rebates and incentives are there in Oregon for solar?

Besides the federal ITC, Oregon has additional incentives for going solar that are dependent on your area and utility company. Of note are Oregon’s residential energy tax credit, solar electric incentive rebate program, and great local and municipal utility rebates. Additionally, Oregon has established one of the best net metering programs in the country that makes purchases for solar panels or community solar a great deal. To learn more about Oregon’s best financial incentives for solar, check out our complete overview of the state’s best solar incentives.

For the Beaver State, residents have long understood the value of their unique natural environment. Policymakers in Oregon have enacted some of the best policies and financial incentives for solar in the nation. Although, Oregon is only ranked 19th in SEIA’s national rankings of 2018, a recently revised Renewable Portfolio Standard (RPS) will help to spur further solar development in the coming years.

The first solar policy passed in the Beaver state was the Renewable Energy Systems Exemption in 1976, which relieved homeowners of any additional property taxes that come with a solar installation. Although the program successful for many years, the program was retired in 2018. The next major solar policy development in Oregon was the Solar Easements & Rights Laws which passed in 1979 to protect a homeowner’s right to install and generate electricity with solar panels without any external restrictions.

Oregon worked to make solar and renewables more accessible in the 1980s through the Energy Loan Program, which was established in 1981 after voters approved a constitutional amendment authorizing the sale of bonds to finance small-scale, local energy projects. Over its life, the Oregon Department of Energy has impressively granted more than $600 million in loans to help its residents improve their energy usage.

The next round of major solar policies came in 1999, when Oregon approved restructuring of its electric-utilities to a deregulated market. One of the most important policies implemented at that time was net metering. Net metering programs have been crucial for solar energy markets across the nation by allowing residents to send surplus net energy to the electric grid and receive compensation for it on their energy bill. For Oregon, their program requires utilities to compensate customers with net excess generation in the form of a kilowatt-hour (kWh) credit at the avoided-cost rate, which is lower than many other states who compensate excess solar generation at the higher retail rate. However, Oregon solar policy excels in other areas, such as by allowing a maximum system size of 25 kilowatts (kW) and through providing access to community solar programs since 2016.

The other major solar policy to emerge from the 1999 restructuring legislation is the Energy Trust of Oregon (ETO). Funded by a 3-cent surcharge on every ratepayer’s utility bills since 2002, the objective of this public benefits fund has been to support renewable energy and energy efficiency projects through grants and subsidies. Following the passage of Oregon’s Renewable Portfolio Standard (RPS) in 2007, ETO became well established in the clean energy industry due to the RPS’s requirement that large investor-owned utilities source 8 percent of their electricity sales from small-scale renewable energy projects with a capacity of 20 MW or less by 2025. Additionally, the legislation that created the RPS adjusted the mission of the renewable energy division of the Energy Trust to tackle this new initiative. Since then, ETO has offered very generous and direct rebates, which today pay $0.45/watt up to $3,600 for solar as long as you’re a customer of Portland General Electric (PGE) or Pacific Power.

Although this rebate will most likely expire around 2025, the overall goal of the RPS, as of its most recent revision in 2016, is to supply Oregon with 50 percent of renewable energy by 2040. This ambitious goal ranks among the top in the nation and has galvanized utilities to provide their own solar rebates so they achieve their renewable mandates. The most notable of these rebates is provided by the City of Ashland, which will pay a cash rebate of $0.50/W, up to $7,500 to its customers for when they go solar.

While all these programs will continue to spur on the solar industry for years to come, one of the most important financial incentives to drive growth historically in the state was the Residential Energy Tax Credits, which was retired in 2017. Created in 2006 and funded by the Oregon Department of Energy, homeowners who installed solar panels prior to 2017 were eligible for a credit on state taxes at $1.70/W of installed capacity, up to $6,000, making it one of the best solar incentives in the country.