Save money by installing solar panels in VA.

Thanks to falling installation costs and strong solar rebates and incentives, going solar is a smarter investment than ever in the Old Dominion. 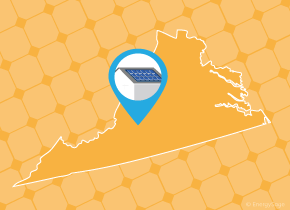 All across Virginia, homeowners are working to protect the state’s natural beauty by switching to renewable energy resources like solar. The decision to switch to solar in Old Dominion is made easier with strong financial incentives, such as a renewable energy systems tax credit, solar easements and rights, and net metering availability.

How much do solar panels cost in Virginia?

See the complete list of top solar installers in Virginia

See the cost of solar in VA cities and towns

What solar panels should I install in Virginia?

How much energy can I get from solar in Virginia?

Aside from the power output of the solar equipment you choose to install, the amount of energy you generate with solar panels in Virginia is directly related to the amount of sunlight that hits your panels. While sunlight is not always plentiful in Virginia, residents should feel fortunate that the state offers strong financial incentives for going solar.

Solar incentives in Virginia can help you reduce the overall price of going solar. Learn more about why solar panels are such a great investment in Virginia.

Learn about solar incentives in VA

What rebates and incentives are there in Virginia for solar?

Besides the federal ITC, Virginia has additional incentives for going solar that are dependent on your area and utility company. Of note are the Tennessee Valley Authority green power providers, net metering availability, and residential property tax exemptions. To learn more about Virginia’s best financial incentives for solar, check out our complete overview of the state’s best solar incentives.

As of 2018, Virginia has installed 730 megawatts (MW) of solar energy capacity, ranking the state 17th on SEIA’s national rankings. Old Dominion can largely attribute the solar industry’s surging growth to developments over just the last few years, especially in 2016 and 2017. While declining solar costs have been a crucial factor, Virginia’s various solar policies have significantly influenced the industry’s development as well.

Virginia’s first solar policy dates back to 1977, when the state issued a Residential Property Tax Exemption for Solar. This policy ensured homeowners they would be exempt from the increased property tax value from their solar installations, sol long as their local city or town approved the legislation.

Many years later, Virginia took the next major step towards large-scale solar development when the state implemented a net metering program in 2005 for residential systems up to 20 kilowatts (kW). Throughout the nation, net metering programs have been crucial for the solar energy industry by allowing residents to send surplus net energy to the electric grid and receive compensation for it on their energy bill. In Virginia, policymakers agreed to credit customers’ solar surplus at the full retail rate, providing a much stronger financial incentive than other states who compensate excess solar at the lower wholesale or avoided-cost rates. The state made further strides in making solar more accessible in 2017 by enacting a community solar pilot program through utilities such as Dominion Energy and Appalachian Power. As of the end of 2018, it appeared that a virtual net metering bill will succeed, which would open solar access to residents who cannot install solar on their own property or who are renters.

In 2006, Virginia implemented Solar Easement regulations: although the policy doesn’t focus on financial incentives, it ensures a process for property owners to work with their fellow neighbors to make sure that nothing shades a solar panel system while the sun is shining.

Across the country, state energy requirements have been instrumental to the development of clean energy. In Virginia’s case, policymakers passed a Voluntary Renewable Energy Portfolio Goal in 2007, with a target of 15 percent renewable generation by 2025. However, due to the fact that the RPS is only voluntary, there are no financial incentives for utilities to invest in renewables or to provide rebates and incentives for residents to invest in solar.

Since 2007, the most notable financial incentive to emerge in Virginia came in 2012 and 2013, when the Tennessee Valley Authority and Dominion Energy began offering solar performance payments to their customers. Specifically, the TVA Green Power Providers and Dominion Solar Purchase Program made solar more attractive by providing premium payments for solar generation. As of 2020, however, both Dominion Energy and TVA have stopped offering these cost-saving incentives.