Ever since 1954, when scientists at Bell Telephone discovered that silicon–an element found in sand–created an electric charge when exposed to sunlight, solar technology has evolved and been adopted by more than 2 million homes throughout the country. Today, solar panel systems provide a very attractive option to homes and businesses as a clean, affordable energy choice.

Thanks to the development of solar panels, we can harness the energy of an inexhaustible source of power–the sun. Solar panel systems work very simply:

Below, we’ll run through a quick overview of solar panel systems, as well as the equipment that you’ll need to produce power using the sun. Already an expert on how solar equipment works? Great! Check out the next pieces in our Solar 101 section, or head to the next section to learn about the benefits of solar.

What is a solar panel?

A solar panel is a device that collects sunlight and turns it into usable electricity. Solar panels are usually made of solar cells (made from the element silicon), wiring, a metal frame, and a glass cover. A typical solar panel is about four feet wide, and six feet tall.


What components make up a solar panel system? 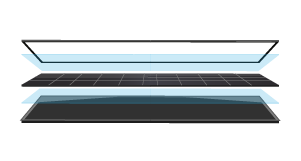 Solar panels consist of a series of silicon solar cells covered by a sheet of glass and held together by a metal frame, with wiring and circuitry in and behind the cells to collect the flow of electrical current out of the solar cells. Each solar panel, also referred to as a solar module, is typically about 4 feet by 6 feet in size, and weighs approximately 30 pounds.

Despite having no moving parts, the “active” component of a solar panel is in the silicon cells themselves: when sunlight hits the silicon solar cells, it activates electrons, which begin to flow through the cell. Wires in the cells capture this flow of electrons, which is then combined with the output of other cells in a solar panel. For a more in-depth look at how solar panels and solar cells actually work, check out our article on the topic.

Typically, solar cells come in either 60 or 72 cell formats. However, many companies are experimenting with new ways to increase the efficiency of the solar cells at converting sunlight into electricity current, so now you’ll see many “half-cut” solar panels, where each cell is cut in half so you have double the number of cells on the solar module (i.e., 120 or 144).

Not all panels are created equal

To find the right solar panels for your home and your wallet, there are a variety of criteria to keep in mind, including product quality, durability, and long-term performance. Learn more about how to evaluate solar panels in the EnergySage Buyer's Guide for solar. 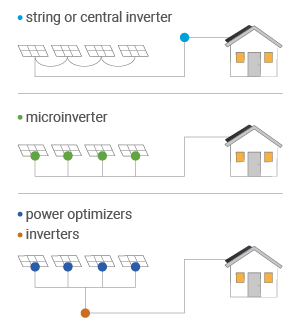 The cells in your solar panels collect the sun’s energy and turn it into direct current (DC) electricity. Most homes and businesses, however, use alternating current (AC). Inverters change the DC electricity from your panels into usable AC electricity. There are two basic types of solar inverters: string (or centralized) inverters and microinverters. String inverters can also add power optimizers to function similarly to a microinverter system.

String (or centralized) inverter: A single inverter connects your entire array of solar panels to your electrical panel. String inverters are frequently the least expensive inverter option, and are a very durable technology that have historically been the most commonly installed inverter type. Multiple strings of panels can be connected to each inverter; however, if the electricity production from one of the panels in a string drops (as may happen due to shading), it can temporarily reduce the performance of that whole string.

Microinverters: If you choose microinverters, one is (usually) installed at each solar panel, which allows each panel to maximize production. If some of your panels are shaded at different times of day or if they aren’t all installed facing the same direction, microinverters will minimize performance issues. The cost of microinverters tends to be higher than the cost of string inverters. 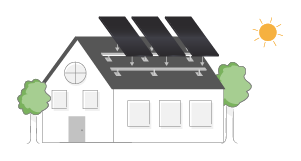 Solar racking and mounting systems are the pieces of hardware that affix your solar panels to your roof or to the ground.

To perform at their best, solar panels should face south and be installed at an angle between 30 and 45 degrees (depending on how far you are from the equator). Panels facing east or west and at a pitch angle of five degrees or more will still work well, but will produce 10 to 20 percent less electricity than those installed under ideal conditions. For residential solar, most roof-mounted systems are “lie-flat” systems, which means the pitch of your solar panels parallels the pitch of your roof. In some cases, though, you can use racking to tilt or position your panels at an angle that is best for capturing the sun’s rays.

There are two types of mounts: fixed mounts, in which the panels remain stationary, and tracking mounts, which allow panels to “follow” the sun as it moves across the sky during the day (single-axis track mounts) and during the changing seasons (dual-axis track mounts). Tracker mounts are only suitable for ground mounted solar. 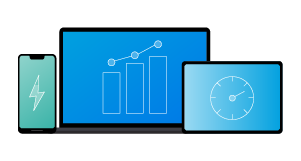 Performance monitoring systems provide you with detailed information about the performance of your solar panel system. With a monitoring system, you can measure and track the amount of electricity your system produces on an hourly basis.

There are two primary types of monitoring systems: