Save money by installing solar panels in AZ.

Plentiful sunshine and great solar incentives make the Grand Canyon State one of the best places in the U.S. for homeowners to go solar. 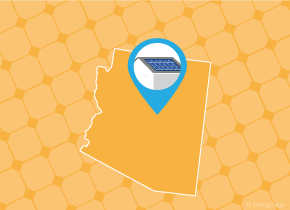 With plentiful sunlight and ranging desert landscapes, former Governor Janet Napolitano best summarized the potential for solar power in Arizona when she said the state could be “the Persian Gulf of solar energy.” Favorable state-sponsored tax credits and equipment tax exemptions have helped many Arizonians save with solar. While the state has capitalized on the availability of sunshine, there is still room for policy improvement.

How much do solar panels cost in Arizona?

Another calculation that potential solar buyers have to consider is the solar payback period. This term tells us as at what time you will recover your initial investment through electricity savings from your solar system. For Arizona, the average solar payback period is 7.01 years.

See the complete list of top solar installers in Arizona

See the cost of solar in AZ cities and towns

What solar panels should I install in Arizona?

How much energy can I get from solar in Arizona?

Aside from the power output of the solar equipment you choose to install, the amount of energy you generate with solar panels in Arizona is directly related to the amount of sunlight that hits your panels. Arizona is one of the sunniest states in the U.S.; therefore, a solar panel installation in the state will likely produce more energy annually than a system of the same size installed elsewhere, such as in the Northeast.

Solar incentives in Arizona can help you reduce the overall price of going solar. Learn more about why solar panels are such a great investment in Arizona.

Learn about solar incentives in AZ

What rebates and incentives are there in Arizona for solar?

Outside of the federal ITC, Arizona has additional incentives for going solar that are dependent on your area and utility company. Of note are the Residential Arizona Solar Tax Credit, Solar Equipment Sales Tax Exemption, and the Energy Equipment Property Tax Exemption. To learn more about the financial incentives available for solar installations in AZ, check out the complete overview of the state’s best solar incentives.

The Grand Canyon state has maintained a curious history with solar energy. While the state ranked 3rd in cumulative solar capacity in 2018 with 3,739 MW, there is still plenty of potential for growth. Much of the success Arizona has sustained in the solar industry can largely be credited to its legislation crafted during the mid-2000s. Recently, the market has become more turbulent with public debates and policy proposals that have made for contentious politics. The history of Arizona’s solar policy will help shine some light on the current market landscape and its path going forward.

Relative to other top solar markets, the industry arrived on the later side for people in Arizona. The first commercial solar power system installed was in 1997, which was a 95 kilowatt (kW) single-axis tracking photovoltaic plant in Flagstaff. Solar regulatory policies in Arizona arrived a few years later, beginning with the creation of the Renewable Energy Standard (RES) in 2000 and the establishment of the Solar Equipment Sales Tax Exemption. These policies respectively marked the first renewables portfolio standard (RPS) and financial incentive for solar in the state.

The RPS was critical for jumpstarting the solar industry, as it required regulated utilities to generate 0.4 percent of their power from renewables in 2002 with solar carve-out of 50 percent. This target prompted the implementation of additional incentives and rebates, such as the Residential Arizona Solar Tax Credit in 2001 and Energy Equipment Property Tax Exemption in 2006. While the Tax Credit and Equipment and Property Exemptions remain options for residential solar customers, only a few rebates are still available today for customers in a handful of rural electric co-ops.

Arguably the most important solar initiative in the state was introduced in 2006 when the Arizona Corporation Commission (ACC) expanded its RES to 15 percent by 2025, with 30 percent of the renewable energy to be derived from distributed energy technologies. Additionally, half of the distributed energy requirement has to be derived from residential installations, which includes but is not limited to solar panels. Another notable moment for the residential solar panel industry was when the Arizona Public Service Company (APS) introduced net metering in 2008, thus allowing excess electricity to be sold back to the electric utility grid at the retail rate. These policies were fundamental in making residential solar panel installations a smart investment for Arizonans.

In recent years, debates have spurred amongst the state regarding the true benefits of solar power in the region. Natural gas, coal, and nuclear energy have been reliable and cheap energy options for Arizona utilities, translating into affordable electricity costs for end consumers. Without strong policies that support solar energy, it has made it more difficult to achieve meaningful payback for residential owners. Furthermore, the imposition of a net metering charge in 2014 further slowed the solar industry’s rate of growth. Two years later, Arizona discontinued retail net metering all together in favor of a “net billing” mechanism that credits energy exported to the grid at an avoided cost rate, which is much lower than the original retail rate offering. Arizona utilities rationalized this change, saying solar customers do not pay their portion of fixed grid costs. However, over a dozen studies have been conducted on the costs and benefits of distributed solar, none of which found evidence of a net negative impact on non-solar customers.

One of the latest debates regarding solar energy in Arizona was Proposition 127, or the Renewable Energy Standards Initiative that was on the ballot as an initiated constitutional amendment in November 2018. A “yes” vote for this amendment would require electric utilities in Arizona to increase its RPS each year until reaching 50 percent in 2030. Unfortunately, the legislation failed to garner enough support and was ultimately rejected at the polls. The State recognizes the need to reduce its carbon footprint, but the APS wants to incorporate its nuclear power in its RPS. The more recently proposed Energy Modernization Plan would increase the state’s RPS to 80 percent by 2050, as well as expand the clean energy target include nuclear power.

Despite this, Arizona still continues to be a leader in solar energy, growing 11 percent over the course of 2018. Key tax credits and exemptions and abundant sunlight remain key fixtures to economically viable residential solar panel installations.