Save money by installing solar panels in CT.

Favorable incentives and high electricity costs make the Nutmeg State one of the most popular places to go solar in the United States. 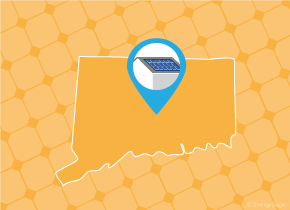 With plenty of natural features ranging from its sandy Atlantic beaches to numerous forest getaways, Connecticut has a high priority to uphold their beloved natural sites. Fortunately, Connecticut has worked tirelessly to provide clean solar energy benefits to its residents. With one of the fastest growing solar energy industries in the nation, this small cloudy state has served as a model for other states in producing a booming solar industry. From its strong RPS, net metering, and rebate programs, Connecticut should continue to be a beacon of light for solar energy for years to come.

How much do solar panels cost in Connecticut?

A critical question many property owners have when they are considering installing solar panels is the amount of time it will take to recover their initial investment through electricity savings. This question is defined as the solar payback period. For Connecticut, the average solar payback period is 9.43 years.

Another choice that solar shoppers have to face is how to pay for a solar panel system. Fortunately, there are many financing options available for property owners looking to invest in solar energy. Cash purchases are one common method to pay for solar and often lead to the most long-term value for your money. For those who prefer $0-down options, solar loans and solar lease/PPAs are available to help finance a solar energy system.

See the complete list of top solar installers in Connecticut

See the cost of solar in CT cities and towns

What solar panels should I install in Connecticut?

How much energy can I get from solar in Connecticut?

Aside from the power output of the solar equipment you choose to install, the amount of energy you generate with solar panels in Connecticut is directly related to the amount of sunlight that hits your panels. Connecticut isn’t one of the sunniest states in the U.S., so a solar panel installation in the state will likely produce less energy annually than a system of the same size installed elsewhere, such as in the Southwest.

There are additional factors that determine how much solar electricity you can produce: shading and panel angle are important in calculating your production estimate, a prediction of how much energy your solar installation will produce over time. You can see an estimate of how much you can save with solar using the EnergySage Solar Calculator – the calculator will take into account site-specific conditions like shade and geography.

Solar incentives in Connecticut can help you reduce the overall price of going solar. Learn more about why solar panels are such a great investment in Connecticut.

Learn about solar incentives in CT

What rebates and incentives are there in Connecticut for solar?

Outside of the federal ITC, Connecticut has additional incentives for going solar that are dependent on your area and utility company. Of note are the Residential Solar Investment Program, Energy Conservation Loan Program, and generous tax exemptions for your property and solar panel purchases. Additionally, Connecticut has a net metering program that credits solar customers for extra electricity their systems generate. To learn more about Connecticut’s financial incentives for solar, check out the complete overview of the state’s best solar incentives.

While Connecticut has been called the Land of Steady Habits, its solar industry spike in recent years has disrupted the energy market in this cozy state. As of 2018, SEIA reports that the small state ranks 20th in the nation in solar capacity with 514.38 megawatts (MW). What makes this ranking more impressive is that Connecticut held a solar capacity portfolio just under 20 MW in 2012. This rapid growth did not just happen overnight, as it has taken years of productive state legislation to help bring Connecticut to the forefront of the solar industry.

Lawmakers had the early foresight all the way back in 1998 when they established a cluster of regulations and incentives that were fundamental to the development of renewable energy in the state. Arguably the most important of these was the state’s Renewable Portfolio Standard (RPS), which took effect in 2000. What an RPS does is provide utility companies compliance mandates to follow that specify how much renewable electricity they have to generate by a given time period. If these mandates aren’t met, the utilities are fined and have to pay a costly fee. From the beginning, Connecticut has had an aggressive RPS program that has prompted utilities to offer solar rebates and incentives in order to meet their marks.

While the RPS program is strong, it is a bit more complicated than what other states have listed because of how they classify renewable energy. Simply put, Connecticut must supply 40 percent of their power from renewable energy by 2030. More specifically, there are three classifications of renewable energy: Class I, II, and III. Class I includes sources like wind, fuel cells, methane gas, off-site ocean power, geothermal, and solar. Class II and III include garbage burning, waste heat recovery, combined heat and power systems, and other energy efficiency sources. Within these classifications, Connecticut must meet 40 percent Class I sources plus an additional 4 percent Class I or II sources, plus 4 percent Class III sources all by 2030. Given these targets, solar energy should continue to be a critical aspect of the state’s renewable energy portfolio in the coming years.

Additional policies that began in 2000 included net metering, the Connecticut Clean Energy Fund, the Energy Conservation Loan, and the Property Tax Exemption for Renewable Energy Systems. While the solar industry did not immediately erupt when these programs took effect in 2000, they all have been essential to the industry. For example, the net metering program in Connecticut has allowed residents to earn full credit on their utility bill for each kilowatt-hour (kWh) of electricity their solar panel system sends back to the grid. In Connecticut, generating excess power is termed as Net Excess Generation (NEG). These NEGs roll over each month until the end of the year where the utility is then obligated to pay its customer at the retail-price for every NEG that has accumulated. In states like Connecticut where residents experience much higher electricity prices than the national average, a strong net metering program makes going solar a great investment.

In 2019, the surge in the solar industry in Connecticut can largely be attributed to the revisions in the Connecticut Clean Energy Fund. These revisions has been extremely successful in driving growth in the state’s solar capacity by providing substantial investments in clean technology and rebates for solar installations. This quasi-government agency, renamed the Connecticut Green Bank in 2011, has been given the authority to administer the fund to leverage much larger sums of capital from the private sector, all of which is invested in the clean energy industry. The public funding for this program has been provided by a surcharge on resident’s ratepayers utility bills that currently stands at $0.001 per kWh (1 mill per kWh). This public-private funding framework was actually the nation’s first state green bank and has inspired other states to take on this model. Harvard University even bestowed the Innovations in American Government Award on the program this past year, demonstrating the tremendous feat of the Connecticut policymakers.

Some of the CT Green Bank’s most impactful public programs are Smart E-Loans launched in 2006, the Residential Solar Investment Program launched in 2012, and C-PACE financing also launched in 2012. The Residential Solar Investment Program was the first solar specific initiative of the state. The initial goal that the Program laid out was to support creating 30 MW of residential solar photovoltaics (PV) by 2022, which was met with ease by June 2014. The Program was expanded in 2015 with an additional goal to support 300 MW of new residential solar PV by 2022. In efforts to meet this goal, the program continues to offer one of the best solar rebates in the nation: homeowners purchasing solar panel systems can receive $0.463 per watt of solar installed (up to 10kW). This rebate won’t last forever though, as the program will expire on 2022 or when the new solar PV installations reach total capacity of 300 MW.

Unfortunately, rebates won’t be the only policy pulled away from interested residents once the Residential Solar Investment Program ends: net metering incentives will also be pulled away at the same time, according to an amendment passed in May 2018. However, current net metering customers and those who buy in before the end of the program will be grandfathered until December 2039. Ultimately, Connecticut’s commitment towards solar power and renewable energy overall will allow the state to continue to find innovative ways to create a flourishing clean energy market.