Save money by installing solar panels in IA. 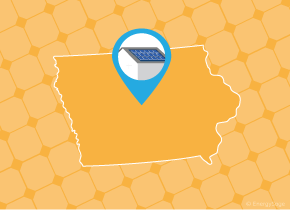 The Hawkeye State is home to a number of incentives and policies–from tax incentives to easement laws–that make it easier to go solar in Iowa. Prospective solar buyers in the state will be excited to learn that Iowa’s net metering rates as one of the best in the country. These incentives make going solar in Iowa a great option.

How much do solar panels cost in Iowa?

Another calculation that potential solar buyers have to consider is the solar payback period. This term tells us as at what time you will recover your initial investment through electricity savings from your solar system. For Iowa, the average solar payback period is 13.47 years.

See the complete list of top solar installers in Iowa

See the cost of solar in IA cities and towns

What solar panels should I install in Iowa?

How much energy can I get from solar in Iowa?

Aside from the power output of the solar equipment you choose to install, the amount of energy you generate with solar panels in Iowa is directly related to the amount of sunlight that hits your panels. The amount of sunlight Iowa receives each year is about average across all states in the country, but solar policies and incentives combine to make going solar in Iowa a worthwhile investment.

Solar incentives in Iowa can help you reduce the overall price of going solar. Learn more about why solar panels are such a great investment in Iowa.

Learn about solar incentives in IA

What rebates and incentives are there in Iowa for solar?

Besides the federal ITC, Iowa has additional incentives for going solar that are dependent on your area and utility company. Iowa has one of the best net metering rates in the country and has some great tax incentives for renewable energy projects. These incentives help make going solar in Iowa a great option for property owners. To learn more about Iowa’s best financial incentives for solar, check out our complete overview of the state’s best solar incentives.

The Hawkeye state has a long history of relying upon renewable energy. In fact, although coal is the most heavily used electric generation resource, wind energy is the second largest source of electricity in Iowa: 37 percent of Iowa’s total electricity generation came from wind energy in 2018, more than in any other state. With such great wind resources to develop, the state has spent less time and money focusing on solar: SEIA’s national ranking lists Iowa as 37th in installed solar capacity in 2019, with around 75 megawatts (MW) of solar as of the end of 2018.

The origins of Iowa’s commitment to renewable energy can be traced back to 1978 when the state passed the Property Tax Exemption for Renewable Energy Systems. This financial incentive, which remains available today, ensures that the market value added to a property from a renewable energy system is exempt from additional state property taxes for five full assessment years. Iowa continued as a leader in renewable energy policy by passing the first Renewable Portfolio Standard (RPS) in the nation in 1983. Known as the Alternative Energy Production law, the policy mandates that Iowa’s two investor-owned utilities own or contract for a combined total of 105 MW of renewable generating capacity and associated energy production. The following year, Iowa enacted the country’s first net metering program to help renewable energy users save on their electricity bills through a surplus energy credit system with utilities.

Iowa continued to support renewable energy through policy into the 1990s: the state passed the Renewable Energy Equipment Tax Exemption in 1993, which saves solar purchasers 6 percent on the price of the system. In 1996, Iowa added the Alternate Energy Revolving Loan Program (AERLP) to the state registry. Administered by the Iowa Energy Center, the loan program covers 50 percent of the total loan at a 0 percent interest rate up to a maximum of $1 million with the rest provided by a lender at the market rate. Overall, the AERLP has provided more than $28.4 million in support of 195 renewable energy projects.

In 2008, the Kalona Farmers Electric Cooperative (FEC) introduced the first performance payment plan for solar in the state: the utility buys electricity back from customer’s solar panels at $0.125/kilowatt hour (kWH). While the FEC is much smaller than the two state-owned utilities (MAE & AEIPL), this provides a strong deal for customers in the utility’s territory and should be recognized for its effort to promote solar energy.

Nevertheless, there is room for more growth of the solar industry in Iowa. As the Iowa Environmental Council notes, the state ranks 16th in technical potential for solar photovoltaic (PV) energy production and has the potential to build over 4,000 gigawatts (GW) of solar- enough to meet Iowa’s current electricity needs 150 times over.